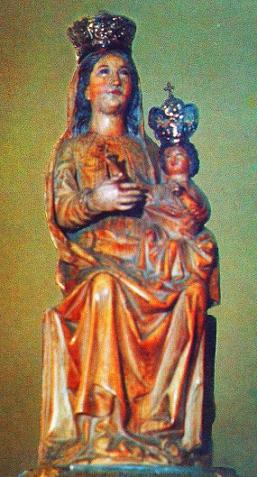 Virgin of the Battles

Virgin of the Battles


In the year of Our Lord 1224, in Castile, King St. Fernando III was making preparations for the resumption of the centuries old battle of the Reconquest.

While he was busy about this work, his beautiful young wife, Beatrice, was resigning herself to the sacrifices that would be necessary to support her husband in this endeavor. Knowing of his great devotion to Our Lady, she resolved to give him the greatest gift possible while at the same time entrusting his safety in a special manner to the Mother of God.

Beatrice commissioned a small ivory statue of Our Lady holding her Infant Son upon her lap that Fernando would be able to keep near him while on campaign. St. Fernando so loved this image of his heavenly Mother that he had his saddlebow specially modified so that the statue would be able to ride before him and be his constant companion.

This statue of Our Lady came to be known as the Virgin of the Battles since she rode before him into every battle that he was to fight during the next 38 years.

St. Fernando was the King of Castile and Leon, but he primarily considered himself to be a soldier for Christ. He sought only the glory of God, and fought for the coming of the reign of Jesus Christ in the greatest number of hearts. Fernando truly desired to conquer Spain so that he could give it to his Lord, and none of his plans of conquest were engaged in with any thought of increasing his own glory. The Reconquest was the worthy cause for which he had vowed to devote his life, and Fernando desired nothing more than to deliver Spain from Muslim domination for the sake of souls. Our Lady was to reward her servant with the grace of never suffering any injury in battle and never losing a battle.

Members of the Catholic clergy also went with the soldiers, including bishops and archbishops. Their purpose was to celebrate the divine office, preach the word of God to the soldiers, and exhort them to frequent the sacraments, and, according to the formal instruction of the king, impress upon them the need to confess and receive communion before each battle.

St. Fernando, for his part, did not omit any of his religious practices during his many campaigns, and usually spent the entire night in prayer before the Blessed Sacrament and this image of Our Lady preceding any taking up of arms.

At the end of each battle Fernando would remove the Virgin of the Battles from his saddlebow for a ceremony intended to give glory to God and His Holy Mother. He would place her on an elevated surface and adorn the area with fresh ivy or flowers. One of the clergy that traveled with them would intone the Te Deum in thanksgiving, as the King and the whole army would answer in full choir. After that they would bandage the wounds of those who needed it and dig graves to bury the dead piously.

Our Lady of the Battles can still be seen today. She resides in the Cathedral of Seville in Spain near the incorrupt body of her servant, King St. Fernando III.

*From the book "St. Fernando III, A Kingdom for Christ" by James Fitzhenry


Return to Titles of Mary Page