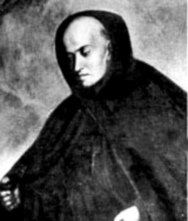 
Born at Valencia in Spain on August 18, 1657, Venerable Anthony Margil early in life manifested an extraordinary interest in the things of God. He loved to spend his time in prayer and visits to Our Lord in the Blessed Sacrament. After he had become a Franciscan and a priest, his whole soul was aflame with the desire to lead others to God. He was among the first who volunteered when missionaries were recruited for the establishment of the first of the so-called apostolic colleges, that of Queretaro in Mexico; and he arrived there on August 13, 1683.

In the New World he became one of its greatest missionaries. He is sometimes called “the Apostle of Texas,” but he was much more than that. He should be styled the Apostle of New Spain, including Mexico, Central America, and Texas. He was in fact a second St Anthony of Padua and another St Francis Solano, so successful were his sermons, so astounding the miracles he performed.

During the forty-three years of his missionary career in New Spain, Father Anthony Margil traveled repeatedly through its vast territory, preaching parish missions everywhere among the Spanish and Indian Christians, and devoting himself to missionary work among the pagan natives in Mexico, Guatemala, Costa Rica, and Texas.

In 1716 he led the missionaries of the Zacatecas College into eastern Texas; and through he was too sick to be present at the founding of the Guadalupe Mission there (so sick in fact that he received the last sacraments – which had happened also on a previous occasion), he personally founded the Texas missions of Dolores and San Miguel.

When the French, during a war with Spain, invaded eastern Texas in 1719, Father Anthony went to the famous Mission San Antonia, later known as the Alamo, which had been founded the year before (May 1, 1718). The following year (1720) he founded the no less famous Mission San Jose near the present city of San Antonio. In 1721 he returned to eastern Texas and restored the missions there.

Recalled to Mexico,Venerable Anthony Margil died a holy death in the great Convento de San Francisco in Mexico City on August 6, 1726. Not long afterwards steps were taken toward his beatification. When the French armies entered Rome in 1797, the documents concerning the cause of Father Anthony Margil were lost; but afterwards they were miraculously found again.

In 1836 he was declared “Venerable,” but his cause has not made any further progress since then. The reason for this probably lay in the persecutions to which the Church in Mexico was subjected during the nineteenth and twentieth centuries. However, the cause of Father Anthony is still pending in Rome, and greater interest in it on the part of the Catholics of the United States would no doubt hasten the day when he would be raised to the honors of the altar. The body of Venerable Anthony Margil was transferred in 1861 to the Cathedral of Mexico City; and it now rests in the Chapel of the Immaculate Conception.

*from The Franciscan Book of Saints, by Fr. Habig, OFM