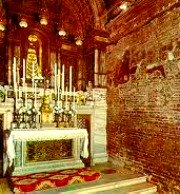 Translation of the Holy House

December 10: Translation of the Holy House of Loreto


Next to the Holy Sepulcher and Saint Peter’s at Rome, there is not in all Christendom a more famous pilgrimage than that of La Santissima Casa de Loreto. The holy house of Nazareth was venerated by the Christians even in the lifetime of the apostles, and Saint Helen enclosed it in a temple which received the name of Saint Mary.

Under the rule of the Arabian caliphs, a crowd of French pilgrims came to adore God and honor his Mother in this simple and poor dwelling, where Jesus and Mary had for a long space of time led a laborious and hidden life. When the Seldjoucid Turks had subjected their old masters, the pilgrims of Europe, who ventured into Syria to visit Jerusalem and Nazareth, suffered barbarous treatment, the recital of which, inflamed the whole of the West, causing an eruption into Asia.

When Godfrey of Bouillon had been proclaimed King of Jerusalem, Tancred, whose lofty deeds have been sung by Tasso, was named governor of Galilee; this prince, who was very devout to Mary, proved his devotion by the sumptuous offerings with which he enriched the church of Nazareth.

After the disastrous expedition of King Saint Louis, that corner of the earth, which was regarded as the cradle of Christianity, was defended foot by foot by the brave Knights Templars, who shed tears of rage and blood at the sight of the holy places profaned by the Saracens.

The last Christian stronghold was at Acre. Eight days before Acre was destroyed, and tens of thousands of Christians were put to the sword, the Holy House of Loreto was lifted up into the air and taken away. This occurred on May 10 in the year 1291.

Galilee, whitened with the bones of the Latin warriors, had become Mohametan. “God was not pleased,” says Father Torsellini, “that the holy house of Mary should remain exposed to the profanations of barbarians; he caused it to be transported by angels into Sclavonia, and thence to the March of Ancona, in the midst of a wood of laurels belonging to a pious and noble widow named Lauretta.”

“The report goes,” he adds, “that on the arrival of the holy house, the great trees of the Italian forest bent down in token of respect, and kept in that position till the axe, or old age, had leveled them to the ground.”

There is an inscription which reads: "Christian pilgrim, you have before your eyes the Holy House of Loreto, venerable throughout the world on account of the divine mysteries accomplished in it and the glorious miracles herein wrought. It is here that most Holy Mary, Mother of God, was born; here that she was saluted by the angel, here that the eternal Word of God was made flesh. Angels conveyed this house from Palestine to the town of Tersato in Illyria in the year of salvation 1291. Three years later it was carried again by the ministry of angels and placed in a wood near this hill, in the vicinity of Recanati, in the march of Ancona; where having changed its station thrice in the course of a year, at length, by the will of God, it took up its permanent position on this spot three hundred years ago (which is now over six hundred years). Ever since that time, both the extraordinary nature of the event having called forth the admiring wonder of the neighboring people and the fame of the miracles wrought in this sanctuary having spread far and wide, this holy house, whose walls do not rest on any foundation and yet remain solid and uninjured after so many centuries, has been held in reverence by all nations."

The Holy House, as it is called, does not rest and has never rested on any solid foundation, something miraculous in itself, for it rests on the solid foundation of God.

*from Life of the Blessed Virgin Mary, with the History of Devotion to Her by Mathieu Orsini, translated from the French, and other sources