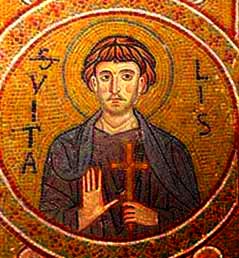 Another holy saint and martyr by the name of St Vitalis was a citizen of Milan, of noble descent; the entire family were Christians, and his conduct was most exemplary. St Vitalis had served in the army of the emperor, and was consequently on terms of friendship with Paulinus, the consul, trusting to whose favor he assisted the persecuted Christians, succored them in their need, and visited tem in their prisons or in the caverns where they lay concealed.

Paulinus was a great enemy of the Christians, but, not knowing that St Vitalis was one, invited him to travel to Ravenna. On their arrival our saint heard that a certain Christian, named Ursicinus, by profession a physician, had been condemned to torture, and seemed frightened at the approach of death.

Vitalis, leaving the consul, ran to the spot, and finding Ursicinus almost ready to yield, exclaimed:

“How is this, my friend? Thou hast the crown almost within they grasp. Having already suffered so much, wilt thou miserably lose it? To avoid these short pains, wilt thou cast thyself into everlasting torments? Thou hast cured the maladies of others; wilt thou now condemn thyself to eternal death? Enliven thy faith! Have confidence in Jesus Christ! Bravely consummate the sacrifice of thyself.”

Upon this exhortation the constancy of Ursicinus revived, and he gave his life for Jesus; upon which Vitalis carried off his body and respectfully interred it.

Information having been given to Paulinus of all that had passed, he said to St Vitalis:

“How then! Art thou mad, to have acted as thou hast, not being a Christian?”

The saint instantly replied: “Nay, but I am a Christian, and am proud to be so. Nor am I mad either. He is mad who gives to wicked men the honor due to God. There is but one only God: this God we adore, and we glory in dying for his sake.”

Paulinus loved Vitalis, but his hatred for the Christians prevailed over this feeling, and he ordered Vitalis to be imprisoned; who, finding himself in the company of other confessors, made such manifestation of his joy, that Paulinus became infuriated, and commanded all his joints to be dislocated upon the rack, and his sides to be torn with iron hooks.

During theses tortures the holy martyr ceased not to preach Jesus Christ, whereupon he was thrown into a ditch and buried alive beneath a torrent of stones, on the 27th of April, of the year 171, according to Baronius.

As St. Vitalis expired, one of the priests of Apollo, who had incensed the tyrant against him, was possessed by a devil; full of rage, he cried out:

“Thou tormentest me, O Vitalis! Thou burnest me.” Seven days after, he cast himself into a river and was drowned.

The relics of this saint are deposited in a magnificent church at Ravenna, built upon the place of his martyrdom.

On the day dedicated to the honor of St. Vitalis, commemoration is made of his wife, St. Valeria, who, while returning from Revenna, after the death of her husband, was so beaten and maltreated by the pagans for her faith, that she expired on the second day after her arrival at Milan. She is also honored as a martyr.