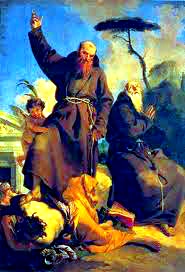 
In the year 1556, at Leonissa in the Abruzzi in the kingdom of Naples, the devout couple John Desiderius and Frances Paulina were blessed with a son, to whom they gave the name Euphranius at baptism, though he would one day become famous under the name of St Joseph of Leonisse. Under their faithful guidance the little boy made such progress in piety that at a very tender age he resolved upon certain feast days, and took the greatest pleasure in practices of piety.

Later on, pursuing his studies at Viterbo, St Joseph of Leonisse attracted the attention and admiration of everyone by his industry and virtuous life to such a degree that a nobleman in that city offered him his daughter in marriage together with a large dowry. But Euphranius had already made a nobler choice. He left school and entered the Franciscan order among the Capuchins at Leonissa, in the year 1573, under the name of Joseph. Here he found happiness and peace in things which an effeminate age abhors most: mortification and penance.

His dwelling was a poor cell, so small and narrow that Saint Joseph of Leonesse could hardly stand, sit, or lie down in it. His bed was the bare earth, a block of wood was his pillow. He ate by preference food which the others could not or would not eat, such as stale beans and moldy bread. In spite of the great strain associated with a life of preaching, he persevered in doing such penance even after he had been entrusted with the task. With works of penance he strove to win over those souls to God that he could not move with words.

In the year 1587, his zeal for souls urged him to go to Constantinople. He could not long conceal from the fanatical Turks the good that he was doing, especially among the Christian captives on the galleys. They seized him, pierced his right hand and right foot with sharp hooks, and hung him up on a high gibbet, then kindled a weak fire under him in order to roast him alive slowly and gradually suffocate him. He suffered untold tortures for three days. On the fourth day he was miraculously freed by an angel and received the command to return to Italy to preach the Gospel to the poor.

From now on he traveled untiringly through all the villages and country towns of Umbria. He strongly denounced evils of that day, such as frivolous dances and plays. In his associations with the people, however, he resembled a lamb in his meekness and charity. His very bearing won for him the affection of the people, and effected the most remarkable reconciliations between persons who had been living in enmity for years, and between families and communities that had been at variance with each other.

Often while at work or at prayer he would be rapt in ecstasy. He wrought many miracles, and was vouchsafed the gift of prophesy and of reading human hearts. He also foretold the day of his death. It was February 4, 1612, when he entered into the joy of his Lord in the convent at Amatrice. His body was taken to his native town of Leonissa, and reposes there, glorified by many miracles.