St Ignatius of Antioch, also called Theophorus, that is, one that carries God, lived in the first century of the Church. He was a disciple of the apostles, particularly of St John; by them he was baptized, and subsequently ordained Bishop of the Church of Antioch which had the honor of having been founded by the Apostle St. Peter, and as the place where the disciples of Jesus Christ were first called Christians.

St Ignatius of Antioch undertook the government of this church after the death of Evodius, the successor of St Peter, which occurred in the year of the Lord 69. Our saint governed his flock with such zeal that all the churches of Syria consulted him as an oracle. In the persecution of Domitian he had to suffer much, and labored, at the risk of his life, for the preservation of the faith, animating his flock to be faithful to the death. St Ignatius of Antioch longed for the glory of martyrdom, frequently saying that he could not be persuaded of his love for Christ till he had testified it with his blood.

Upon the death of Domitian in the year 96, the tempest abated under Nerva, his successor. But during this time heretics did not cease to trouble the Church; this is the reason why the saint, writing to the faithful of Smyrna, recommended them not to have any communication with them: “Be satisfied,” he said to them, “with merely praying to God for those who abstain from the Eucharist, because they deny it to be the flesh of Jesus Christ, who died for our sins.”

In the year 105 the persecution was renewed by the Emperor Trajan. This prince, after his conquest of the Scythians and the Dacians, published an edict which obliged all, under pain of death, to offer sacrifice to the gods.

Marching afterwards against the Parthians, he arrived at Antioch; and, hearing with how much zeal and success St Ignatius propagated the Christian religion, he called him to his presence and thus addressed St Ignatius of Antioch thusly: “Art thou that wicked demon called Theophorus, who taketh pleasure in violating our edict of sacrificing to the gods, and dost continue to seduce the inhabitants of this city by preaching the law of Christ?”

Saint Ignatius replied: “Yes, prince, I am called Theophorus; by no one can Theophorus be called a demon, because the devils fly from the servants of God. If thou callest me a devil because I endeavor to defeat the machinations of the devil, I well deserve the name.”

Trajan asked St Ignatius the signification of the term Theophorus; the saint replied: “It signifies ‘the bearer of God.’”

The emperor replied: “Thou carriest God in thy heart; and we, have we not also in ourselves the gods that assist us?”

St Ignatius of Antioch answered with enthusiasm: “It is an error, O prince! To give the name of gods to the demons that you adore: there is only one true God, the Creator of heaven and earth, and Jesus Christ, His only begotten Son.”

The emperor replied, “Dost thou speak of Him who was crucified under Pontius Pilate?”

“Yes,” answered the saint, “of Him I speak who has confounded the malice of devils, and placed them beneath the feet of those Christians who carry God in their hearts.” St Ignatius of Antioch added that Trajan would be more happy, and his empire more prosperous, if he would believe in the Lord Jesus; but the emperor, heedless of these exhortations, offered to make him a priest of Jupiter and a member of the senate if he would sacrifice to the gods. The saint replied that he was content to be a priest of Jesus Christ, for whom he ardently desired to shed his blood.

Trajan, filled with anger, then pronounced the sentence upon the saint-that he should be conducted in chains to Rome, and devoured by be wild beasts at the public games.

St Ignatius of Antioch, having heard the sentence, raised his eyes to heaven, and exclaimed: “I thank Thee, O Lord, because that Thou hast vouchsafed to make me worthy of giving Thee a proof of my love by sacrificing my life for Thy faith; I desire, O Lord, that the beasts may hasten to devour me, that I may make to Thee the sacrifice of myself.”

St Ignatius of Antioch then stretched forth his hands to be chained, kissing the manacles as they bound him; and with tears recommending his church to God, he was conducted by the soldiers to Seleucia, and thence to Smyna, accompanied by two of his deacons, Philo and Agathopodus, who are believed to be the authors of his acts.

Wherever the saint passed, he ceased not his exhortations to the faithful to persevere in faith and prayer, to be enamored of the riches of heaven, and to despise those of this earth.

The Christians came, in great numbers, to meet St Ignatius of Antioch and to receive his blessing, especially the bishops and priests of the churches of Asia, who, as they perceived him going so joyfully to martyrdom, wept in the tenderness of affection.

Having arrived at Smyrna, he embraced St Polycarp, and they mutually consoled each other; he thence wrote to the churches of Ephesus, Magnesia, and Trallia. Amongst other things, he says to the Ephesians: “I carry my chains for Christ, which are to me spiritual pearls, more prized than all the treasures of the world.”

Knowing that from Smyrna some Ephesians had to go to Rome by a route shorter than his, St Ignatius of Antioch conveyed by them his celebrated letter to the Romans; the letter is long, but a few passages are particularly worthy of being transcribed; they are as follows:

“Suffer me to be the food of wild beasts, whereby I may attain unto God. I am the wheat of God, and am to be ground by the teeth of wild beasts, in order that I may be found the pure bread of Christ…I earnestly wish for the wild beasts that are prepared for me, whom I heartily desire may soon dispatch me; I will entice them to devour me entirely and suddenly, that they may not spare me as they have others whom they feared to touch; but, if they are unwilling to meddle with me, I will even compel them to it.

Pardon me, my children, I know what is good for me; I now commence to be a disciple of Christ, since I have no desire for anything visible or invisible, so that I may attain to Jesus Christ. Let fire or the cross, or the concourse of wild beasts-let cutting or tearing of the flesh-let breaking of bones and cutting off limbs-let the shattering in pieces of my entire body, and all the torments invented by the devil, come upon me, so I may but attain unto Jesus Christ…

It is better for me to die for the sake of Jesus Christ, than to rule to the ends of the earth…Pardon me, brethren; be not my hindrance in attaining to life, for Jesus Christ is the life of the faithful; whilst I desire to belong to God, do not ye yield me back to the world…

Permit me to imitate the Passion of Christ my God; let none of you who are present attempt to succor me-be rather on my side, that is, on God’s; entertain no desire of the world; having Jesus Christ in your mouths, let no envy find place in your breasts. Even were I myself to entreat you, when present, do not obey me, but rather believe what I now signify to you by letter…

My love is crucified!...

I take no pleasure in the food of corruption, nor in the enjoyment of this life. I desire the bread of God, which is the flesh of Jesus Christ, and for drink his blood…

Pray for me, that I may possess God. If I consummate my sacrifice this will be a sign that you have given your consent, and that ye truly love me.”

He next arrived at Troas, whence he wrote epistles to the churches of Philadelphia and Smyrna, and to his friend St Polycarp, to whom he recommended the church of Antioch. The soldiers fearing that they would arrive too late at Rome, because the public games were nearly at an end, hastened their march, to the great satisfaction of the holy martyr, who ardently desired to be at the place of execution.

When he was near Rome, the Christians came in great numbers to meet and salute him. They thought, as Fleury relates, ‘to induce the people to solicit his pardon, but the saint repeated what he had stated in his letters, and prevented all interference.’

On entering Rome, he knelt down with the other Christians to offer himself to God, and fervently prayed that peace might be restored to the Church.

St Ignatius of Antioch was then conducted to the amphitheatre, where immense numbers were assembled; and, hearing the bellowing of the wild beasts, he repeated the memorable words of the epistle to the Romans: “I am the wheat of God, and am to be ground by the teeth of wild beasts, in order that I may be found the pure bread of Christ.” 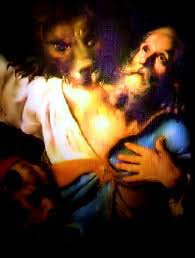 St Ignatius of Antioch was instantly devoured by lions, as he had desired to be, and at the moment of his death he was heard to invoke the adorable name of Jesus.

Only the larger bones of his body were left; these were collected and brought to Antioch by his two deacons, to whom St Ignatius of Antioch appeared on the following night, resplendent with glory. His martyrdom took place on the 20th of December, of the year 107. After the destruction of Antioch by the Saracens, his relics were removed to Rome, and placed in the Church of St Clement where at the present day they are venerated with great devotion. His name has been inserted into the canon of Mass.