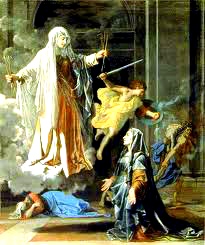 
St Frances of Rome was born into a noble Roman family in 1384. At the age of 12 she married another Roman noble, Lorenzo Ponziani. She would have preferred to become a nun, but obeyed her father and became an exemplary wife and the mother of three children.

Soon after her marriage, St Frances fell seriously ill. Her husband called a man in who dabbled in magic, but St Frances drove him out of the house in no uncertain terms. St Alexis then appeared to her and cured her.

From that time, St Frances of Rome began to be conscious of the presence and assistance of her guardian angel. He would give her a little nudge when she fell into any fault.

The Ponziani palace was in the Trastevere section of Rome, and just around the corner was the little church of San Francesco a Ripa. This church had been given in 1212 to St Francis by the Roman lady Giacoma di Settesoli (Brother Jacoba), who in 1226 was present at the death of the Poverello. By 1414 at least, the adjoining friary was one of 34 belonging to the Observant reform movement in the First Order of St. Francis, which was begun in 1368 by Brother Paul or Paoluccio of Trinci and in the following century was promoted by such saints as St Bernard and St John Capistrano.

It was at San Francesco a Ripa that Frances Ponziani was received into the Third Order of St Francis; and one of the priests there, Father Bartholomew Bondi, became her spiritual director.

Living at the Ponziani palace with St Frances of Rome was Vanozza, the wife of her oldest brother. She too had entertained thoughts of entering a convent before her marriage, and she joined St Frances in her works of piety and charity. Together they spent hours of prayer in a disused attic or an old summer cottage in the garden.

At seventeen, St Frances of Rome gave birth to her first son, John Baptist; and shortly afterwards her mother-in-law died. St Frances was then placed in charge of the household; and she carried out her duties, not only efficiently, but also in a genuinely Christian manner.

During a famine she gave away corn to the poor so lavishly that her husband began to object. When he went to the empty granary, however, he found it miraculously filled with forty measures of wheat "so shining and so full...that it seemed as though it had been raised in Paradise and reaped there by angels..."

St Frances also gave wine to any who asked, finally using the last cask filled with wine in the cellar. It was found empty when her annoyed father-in-law sought a glass of wine for himself. He raved at the saint, telling her she was bringing privation upon them to feed strangers. St Frances asked her family to have faith, and walked to the cellar with them. She turned the spicket on the empty cask and wine began to flow - the best wine any of them had ever tasted. Now the father-in-law changed his tune, saying:

"Oh, my dear child, dispose henceforward of everything I possess, and multiply without end those alms that have gained you such favor in God's sight!"

Rome was invaded in 1410; and during the civil war which followed, a series of calamities befell the Ponziani family. Lorenzo, who fought with the papal troops, was wounded; and after St Frances had nursed him to health, he went back to the war.

John Baptist, the oldest son, was taken hostage, and did not return until peace was restored. A plague followed in the wake of the war, and Frances' second son and a daughter died of the disease.

The peasants from the wasted Ponziani farm came to St Frances, begging for food. Frances heroically devoted herself to the care of the sick, the starving, and the dying, and organized a group of Roman ladies to assist her in this work. For a time she too was stricken by the plague, but after she was suddenly cured she at once resumed her works of charity.

After his death, Frances' second son appeared to her and brought her an archangel to take the place of her guardian angel. The archangel's light was visible to her so that she could read by it. When she committed a slight fault, the archangel would hide himself and his light would not shine again until she had made an act of contrition.

Shortly after his return, John Baptist married a flighty young lady, who took a strong dislike to St Frances. But in the midst of one of her tempers she was afflicted with a strange illness; and after Frances' hand calmed and cured her she became a changed person. Frances placed the household in her care and devoted herself henceforth entirely to works of charity in the city.

In 1425, St Frances of Rome and a half dozen other Roman ladies, her companions, were clothed as oblates of St Benedict. This apparently did not cancel her membership in the Third Order; for, at this time she and Vanozza made a pilgrimage to Assisi, walking the one hundred miles from Rome to the city of St Francis. Near Assisi St Francis himself appeared to them, and provided the hungry and thirsty pilgrims with fresh, juicy pears by striking a wild pear tree with his stick.

In 1433, after Lorenzo's death, St Frances of Rome and her companions founded a religious community of Oblates. There they worked and prayed for the Holy Father and the peace of Rome, for the city was once more in turmoil. 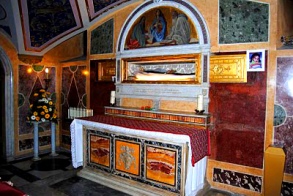 Returning to this convent after a visit to her sick son, St Frances suddenly became ill and was taken back to the Ponziani palace. There she died after seven days, on March 9, 1440.

The tomb of St Frances was opened some months after her death, and besides finding the saint incorrupt, her body gave off a delightful fragrance. In 1638 her tomb was opened again, but on this occasion only the bones of the saint remained.

Pope Paul V canonized Frances in 1608. Her tomb is beneath the high altar in the crypt of the Roman church which is now called Santa Francesca Romana in her honor. She is honored as the principal patron of all Benedictine oblates, but she is also one of the greatest saints who wore the habit of the Third Order of St Francis.