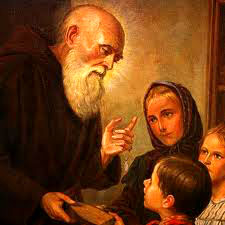 
St Conrad of Parzham, whose baptismal name was John, was the son of the devout and honest couple George Birndorfer and Gertrude Niedermayer. He was born on a farm near the town of Parzham in Bavaria in the year 1818.

From his earliest years, St Conrad of Parzham gave indications of his future sanctity by his modesty and love of solitude. The fervor of his devotion was noticeable especially when he prayed in church, the distant location of which was no hindrance to his visiting it frequently even in inclement weather.

St Conrad of Parzham was inflamed with great love for the Blessed Virgin, and each day fervently recited the rosary. On feast days he frequently made a journey to some remote shrine of the Mother of God. During such pilgrimages, always made on foot, he was constantly engaged in prayer, and when he returned in the evening, he was usually still fasting.

Having spent his youthful years on the farm, closely united to God by means of interior union with Him, St Conrad of Parzham decided at the age of 31 to bid farewell to the world. After disposing of a very large inheritance, he received permission to be admitted as a lay brother among the Capuchins.

Immediately after his profession he was sent to the convent of St. Anne in the city of Altoetting. This place is particularly renowned among all others in Germany for its shrine of the Mother of Mercy, and hundreds, even thousands of the faithful come there daily. Because of the great concourse of people in this city, the duty of the porter at the friary is a very difficult one.

As soon as he arrived, this charge was given to Conrad, who retained it until his death. Diligent at his work, sparing in words, bountiful to the poor, eager and ready to receive and help strangers, Brother Conrad calmly fulfilled the task of porter for more than 40 years, during which time he greatly benefited the inhabitants of the city as well as strangers in all their needs of body and soul.

Among the virtues he practiced, he loved silence in a special way. His spare moments during the day were spent in a nook near the door where it was possible for him to see and adore the Blessed Eucharist. During the night he would deprive himself of several hours of sleep, to devote the time to prayer either in the oratory of the brothers or in the church. Indeed, it was quite generally believed that he never took any rest, but continually occupied himself in work and exercises of devotion.

On a certain feast day, when he had ministered to a large number of pilgrims, he felt his strength leaving him. He was obliged to manifest his weakness to his superior. Obedience sent him to bed. Only three days later, little children, to whom the news of Conrad's sickness had not been given lest they be overly saddened, gathered as by instinct around the friary, reciting the rosary.

As Blessed Father Francis had died to the music of the birds he loved, so his son died with the voices of the children, these lovely creatures of God, ringing in his ears.

On April 21, 1894, the Capuchin porter heard the sound of the Bell for which he had so patiently waited. For the last time he ran to the Door. But this time the Door was literally his Christ.

His heroic virtues and the miracles he performed won for him the distinction to be ranked among the Blessed by Pope Pius XI in the year 1930. Four years later, the same pope, approving additional miracles which had been performed, solemnly inscribed his name in the list of saints.