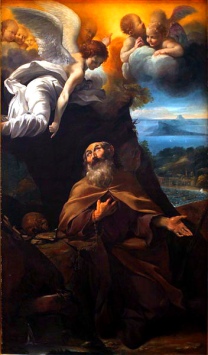 
St Conrad de Plaisance was born at Piacenza, Lombardy, in the year 1290, of a very noble family. He married Euphrosyne, the daughter of a nobleman of Lodi, while he was still quite young. He had a great fondness for chivalrous sports and was an eager hunter.

One time when out hunting, his quarry hid itself in dense underbrush. To force it into the open, Conrad directed his attendants to set fire to the brushwood. The wind, however, drove the flames upon a nearby grain field, where it continued to spread, destroying the entire crop and a large forest besides.

The governor of Piacenza at once sent out armed men to apprehend the incendiary.

Filled with consternation at the unfortunate turn of the conflagration, Conrad meanwhile fled into the city along certain lonely roads. The posse, however, came upon a poor peasant who had gathered a bundle of charred sticks and was carrying them into the city. Believing him to be the guilty person, the men seized him. He was tortured on the rack until they wrung from the poor man a statement that he had set fire to the woods out of sheer spite. He was condemned to death.

Not until the unfortunate victim was passing Conrad's house on the way to execution, did Conrad learn why the sentence of death had been imposed on the peasant. Driven by his conscience, Conrad rushed out, saved the man from the hands of the bailiffs, and before all the people acknowledged that he was the guilty person. He went to the governor and explained that the conflagration was the result of a mishap; that he was willing to repair all the damage done. His wife joined him in his good will and sacrificed her dowry to assist in making restitution.

The incident taught Conrad the vanity of the goods of this world, and he resolved to give his attention only to eternal goods. He communicated his sentiments to his wife, and found that she entertained the same ideas. She went to the convent of Poor Clares and received the veil there, while Conrad, who was only 25 years old, left his native town and joined a group of hermits of the Third Order.

In a very short time he made such progress in virtue that the fame of his sanctity attracted many of his former friends and acquaintances to his hermitage. But it was Conrad's wish to forsake the world completely; so he slipped away to Rome, and from there went to Sicily, to the Noto valley, near Syracuse, where he hoped he could remain unknown and in utter seclusion. He lived there for 36 years, the last of which he spent in a lonely cave on a height since named Mount Conrad.

There St Conrad de Plaisance lived an extremely penitential life, sleeping on the bare earth and taking only bread and water with some wild herbs for nourishment. Nevertheless, he was subjected to some of the most terrible assaults of the devil. But by means of prayer so pleasing to God that he was granted the gifts of prophesy and miracles.

When Conrad perceived that his end was drawing near, he went to Syracuse to make a general confession of his life to the bishop. On the way flocks of birds flew about him and perched on his shoulders as they used to do to St Francis, and on the way back to his solitude they accompanied him again, to the astonishment of all whom he met. On the very same day St Conrad de Plaisance was seized with a fever, which resulted in his death a few days later.

St Conrad de Plaisance was kneeling before an image of the Crucified when he peacefully passed away on February 19, 1351. In accordance with his wishes he was buried in the church of St. Nicholas at Noto, where his remains still repose in a silver shrine. Many miracles have taken place there. In the year 1515 Pope Leo X permitted that his feast be celebrated at Noto. Pope Urban VIII canonized him in 1625. 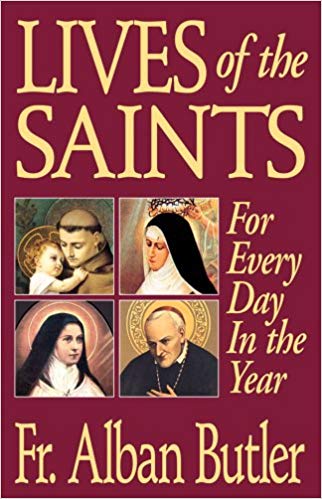 Butler's Lives of the Saints is the most revered Catholic book after the Bible, the Missal and The Imitation of Christ. A Saint or two for each day of the calendar. Great for a daily meditation; each life is followed by a "lesson" from the life to help us apply the virtues of the Saint to ourselves. Great for the entire family. Includes famous Saints since Fr. Butler's time; all recounted in the same beautiful, reverent spirit that was his. Impr. 463 pgs, PB