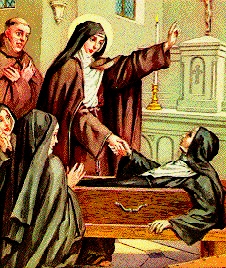 
In the little town of Corbie, France, St Colette was born on January 12, 1381, of exemplary working people. She was a child of grace, an answer to her mother's incessant prayers, for the latter was already 60 years old then and had been childless up to that time.

The little girl took great pleasure in prayer, in compassion for the poor, and in rigorous mortification, making of her soul and of her tender body a sacrifice to God. Up to her 14th year St Colette de Corbie remained unusually small in stature; the was a great grief got her father. St Colette begged God to console her father in this matter, and then she began to grow very rapidly to normal height.

On the other hand, St Colette de Corbie asked God to deprive her of the rare beauty she possessed, which she believed might be the occasion of danger to herself and others; that request, too, was granted, and Colette developed features of a severe cast which inspired great respect.

When both her parents had died, St Colette de Corbie, at the age of 22, obtained the permission of the Church authorities to shut herself up in a small abode directly adjoining the church; from a small window in it she could see the Blessed Sacrament. There she expected to spend the remainder of her life as an anchoress. She had embraced the rule of the Third Order of St Francis, in accordance with which she endeavored to live in perfect poverty, severe mortification, and constant prayer in order to become daily more and more like the Seraphic Father. She received many consolations from heaven, but on the other hand she also experienced severe temptations and even corporal abuse from the spirits of darkness.

Almighty God had destined St Colette for something extraordinary. He excited in her the desire to re-introduce the strict observance of the rule of St Clare, which many convents of Poor Clares then observed in a modified form.

The humble virgin recoiled at the thought, which she tried to persuade herself was an illusion of the proud spirit of darkness. But the inspiration returned again and again, and when St Colette de Corbie continued to resist it, she was struck dumb and later on blind, until she finally resigned herself to the will of God, like Saul before Damascus.

"Lord," St Colette de Corbie sobbed in her heart, "what wilt Thou have me do? I am ready to do anything Thou desirest of me."

At once her speech and her sight were restored. The Lord sent her a special director under whose guidance she was to perform extraordinary things. And so, after spending four years in her retreat, and with the authority and the blessing of the pope, she established one convent of Poor Clares after another, so that the number reached 17 during her lifetime.

After her death similar foundations were established in countries other than France, in which the primitive rule of St Clare began to flourish anew.

St Colette de Corbie endured untold hardships in fulfilling the task assigned to her, but heaven supported her even in visible ways; numerous miracles, including the raising to life of several dead persons, occurred in answer to her prayers and in confirmation of her work. So, the great foundress remained ever humble, regarding everything as the work of God, who often chooses the lowliest of people as His instruments.

On this foundation of humility she endeavored to foster in her convents the spirit of prayer and simplicity of heart, she placed great value on the recitation of the Divine Office in choir, undoubtedly in remembrance of the practice existing in her native town, and infused this esteem into her fellow sisters. She was also filled with zeal for the salvation of souls, and once in a vision she saw souls falling into hell more swiftly than the snowflakes in a winter's storm.

St Colette reformed the Order of Poor Clare's and founded a branch of the Order that is still known as the Colettines.

St Colette had a special devotion to St John the Apostle, who appeared to her on one occasion to place a miraculous ring on her finger. As he did so, he said: "by my own right and on behalf of the sovereign King and Prince of virginity and chastity." This ring was visible to all, and was a beautiful and very precious ring of gold.

St Colette had a great desire for a relic of the True Cross. One day when she was contemplating Our Lord's suffering in the midst of her community, she was drawn into an ecstasy. When her contemplation was over, she realized she was holding a small gold crucifix that had not been there before. It contained a small relic of the True Cross. Years later, upon preparing for her death, she gave away her few possessions. The abbess of Besancon received this cross as St Colette told her: "Keep it and treasure it, for it is from Heaven."

After laboring for 40 years, she was to receive her eternal reward. She died in her convent at Ghent on March 6, 1447. At the moment of her departure from this world she appeared to several sisters in different convents. Pope Urban VIII beatified her, and Pope Pius VII.