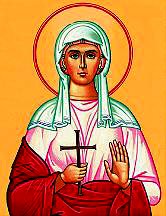 
History indicates that the first saint whose body experienced the phenomenon of incorruption is St Cecilia, the patroness of musicians.

The year of St Cecilia's birth is unknown, but it is believed she died about 177 A.D. Cecilia was a member of a rich and distinguished Roman family, who gave her in marriage to a young nobleman named Valerian, despite her desire to remain a virgin. On their wedding night St Cecilia was successful in persuading the new groom to respect her vow of virginity and later converted him to the Faith when he was favored with a vision of Cecilia’s guardian angel.

Valerian and his brother, Tiburtius, who was also converted by St Cecilia, were later called upon by the early Christian persecutors to renounce their religion. When both heroically refused, they were beheaded and buried along the Appian Way.

Cecilia was arrested for having buried their bodies and for this crime was given the choice of sacrificing to the heathen gods or being put to death. St Cecilia steadfastly affirmed her faith and chose to die rather than renounce it.

Because of her nobility and youth, her captors decided to execute St Cecilia in secrecy to avoid the expected criticism of the people. She was subsequently confined to the vapor bath of her home to die of suffocation. St Cecilia remained a whole day and night in that stifling environment, yet remained unharmed.

An experienced executioner was then sent to behead St Cecilia, but due to a loss of courage at having to kill such a young and beautiful woman, he failed to sever her head with the three blows required by law. He ultimately fled, leaving the Saint on the pavement of her bath, alive and fully conscious, with her head half severed.

St Cecilia was lying on her right side, her hands crossed in prayer before her. She turned her face to the floor and remained praying in that position for three days and nights. The position of her fingers, three extended on her right hand and one on the left, were her final silent profession of faith in the Holy Trinity.

The early Christians clothed the body of the martyr in rich robes of silk and gold and placed it in a cypress coffin in the same position in which she had expired. At her feet were placed the linen cloths and veils which were used to collect her blood.

She was laid to rest in the Catacomb of St. Callistus by the future Pope Urban, who had baptized her husband and brother-in-law.

In the year 822, during the time of the restoration of the church dedicated to her memory, Pope Pascal I wished to transfer the remains of the Saint to a place of honor in her cathedral but could not locate her grave. The Saint appeared to him in a remarkable vision while he was at prayer and told him of the location of her body. The relic was found in exactly the place indicated.

The Pope then had the body, along with the bones of her husband, her brother-in-law, and the martyr Maximum, placed below the altar of the church.

Seven hundred seventy-seven years later, one of the most documented exhumations of any saint’s body occurred in 1599, when Cardinal Sfondrato ordered the restoration of some parts of the basilica. On October 20th of that year, during the course of work being done under and near the high altar, two white marble sarcophagi were discovered, which corresponded with the description left by Pascal I of the caskets containing the relics of the holy martyrs.

The Cardinal had the sarcophagi opened in the presence of witnesses of unquestionable integrity. After the marble covering was removed, the original cypress casket was found in a good state of preservation. The Cardinal, with understandable emotion, raised the lid, exposing to view the treasure which had been confided to the grave by Popes Urban and Pascal.

The mortal remains were found in the same position in which the Saint had died almost fifteen hundred years before. Through a silk veil which modestly covered the body could be seen the gold embroidered dress of the Saint, the mortal wound in the neck, and the blood-stained clothes.

Pope Clement VIII was informed at once of the discovery but was unable to visit the tomb immediately because of the severe attack of the gout, but sent instead Cardinal Baronius, who together with Antonio Bosio, the explorer of subterranean Rome, left us priceless descriptive documents relating to the events of this exhumation.

Peering through the ancient veil which covered the body, they noted that Cecilia was of small stature and that her head was turned downward, but due to a “holy reverence,” no further examination was made. Bosio recorded his opinion that the Saint was found in the same position in which she had expired.

A sculptor of unusual talents, Stefano Maderno, who it appears was engaged in performing his trade during the restoration of the Basilica, executed a statue of the Saint, which is reputed to be one of the most celebrated and best known Italian works of art and is believed to represent the Saint in the exact posture of her body. This statue is found immediately in front of the high altar in a niche of black marble, which was designed by Maderno to give the appearance of an open sarcophagus. Doing so, Maderno introduced a new altar design which was frequently imitated.

The Basilica of St. Cecilia is believed to have been built on the site of St. Cecilia’s family mansion. The second chapel, on the right aisle, is called the Caldarium and is the room where St. Cecilia was condemned to death. Here are found the remains of an ancient Roman bathroom; the conduits are preserved which formerly contained the water which was heated in the lower room. The marble slab on the altar is the one on which Cecilia is believed to have survived the first martyrdom by suffocation and very well may be the slab which marked the place of her death.