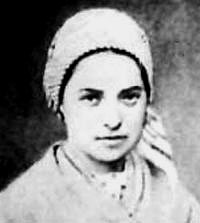 Born at Lourdes, France, on January 7, 1844. She was the oldest child of a miller named Francis Soubirous and his wife, Louise. She went by Bernadette as a child, and lived in abject poverty with her parents. She suffered from asthma, and was a poor student, which kept her from making her first Holy Communion until she was 14.

On February 11, 1858, while collecting firewood with her sisters along the banks of the Gave River near Lourdes, she alone saw a vision of a beautiful woman inside a cave above the riverbank. She was dressed in white and blue with golden roses on her feet. St Bernadette’s report was not immediately accepted, even by her mother, but her visions of the Lady drew increasingly larger crowds. Despite great hostility on the part of the socialist civil authorities, St Bernadette Soubirous’ reports of the visions continued, and on February 25 Our Lady told St Bernadette to “Drink of the fountain,” and caused a spring to flow from the earth.

On March 25, Our Lady finally revealed to St Bernadette her title, saying: “I am the Immaculate Conception,” confirming the declaration of Pope Pius IX, who had proclaimed it a dogma of the Church four years previously. The Blessed Virgin related to St Bernadette that she wanted a chapel built on that site, which eventually happened.

St Bernadette Soubirous became a Sister of Notre Dame at Nevers in 1866, and she remained there, near Lourdes, for the rest of her life. She became a member of the Confraternity of the Cord of St. Francis, having been received into this society after she had become a religious sister. St Bernadette suffered greatly from tuberculosis of the bone in her right knee until her death on April 16, 1879.

St Bernadette Soubirous’ body was exhumed on September 22, 1909, and was found to be incorrupt, and her skin had the same color as that of a living person. St Bernadette was found in a similar state during a second exhumation in 1919. After this occasion she was placed in a gold and glass reliquary at the motherhouse of the Sister of Nevers, where she appears to be sleeping even until this day. 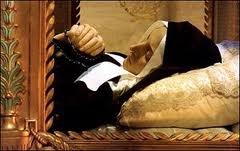 St Bernardette Soubirous was canonized in 1933 by Pope Pius XI. The little town of Lourdes became the site of pilgrimages, similar to Santiago de Compostella in Spain, attracting millions of faithful Catholics every year. Astonishing healings began almost immediately in the miraculous water at the shrine of Our Lady of Lourdes.