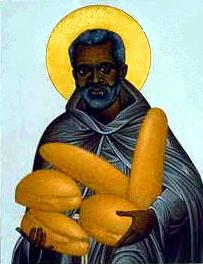 
St Benedict the Black was the son of Negro slaves who were taken from Africa to San Fratello, Sicily, where they were converted to Christianity. They lived such exemplary lives and fulfilled their duties so thoroughly that their owner, in appreciation, granted freedom to their eighteen-year-old son, Benedict. He continued to work as a day laborer, generously sharing his small wages with the poor and spending his free time in caring for the sick. Because of his lowly origins, St Benedict the Moor was often the object of ridicule, which he bore so patiently and cheerfully that he was called even during his youth, “The Holy Black.”

When twenty-one years of age, he became acquainted with Jerome Lanze, a nobleman who had left the world to live under the rule of St Francis of Assisi. Benedict sold his few possessions, gave the money to the poor and joined the monastic group at San Fratello, later moving with them to Palermo. For many years he was happily employed in the kitchen as a lay brother at the Friary of St Mary of Jesus, but upon the death of his director, he was chosen the guardian of the friary, even though he could neither read nor write. After serving one term in this office, he was chosen novice master, his counsels being eagerly sought by the novices, professed religious and people of every class. He possessed extraordinary gifts of prayer, was divinely given an infused knowledge of the Scriptures, and had an intuitive grasp of deep theological truths, which astounded learned men and aided him in the direction of souls.

The reports of his sanctity spread throughout Sicily, and the monastery was constantly beset with visitors – the poor requesting alms, the sick in search of a miracle, and people of all ranks seeking advice or prayers.

St Benedict's face was often seen to shine with a celestial light, especially when he was praying in the chapel. He was employed as a cook, but it was noted that angels were seen assisting him in the kitchen and than, moreover, food seemed to multiply miraculously under his hands.

Although St Benedict the Moor never refused to see anyone, he would have preferred to live a hidden life, unknown to the world. Toward the end of his life he willingly returned to the humble duties of the kitchen when he was relieved of all offices. He died after a short illness at the age of sixty-three, at the very hour he had predicted, and was buried with great solemnity in the common vault behind the sacristy of the church.

Immediately after his death a vigorous cult developed, and his veneration spread throughout Spain, Italy and Latin America. St Benedict the Moor was beatified by Pope Benedict XIV in 1743 and was canonized by Pope Pius VII in 1807.

The first exhumation of his remains occurred on May 7, 1592, three years after the Saint’s death, at which time his body was found perfectly preserved.

In the year 1611, King Phillip III of Spain assumed the expense of providing in the same church, a new shrine situated on the left side of the altar of S. Maria de Gesu, to which the Saint’s incorrupt remains were transferred with great solemnity.

The sacred relic, still incorrupt but a little dry and hard, is exposed for public veneration. The face of the Saint was covered some time ago with a thin wax mask. Thus has God blessed the virtues of the former slave with the gift of incorruptibility, which blessing has endured for almost four hundred years.

St Benedict the Black has been proclaimed the “Patron of all Negro Missions in North America.”

*From the book The Incorruptibles, TAN books