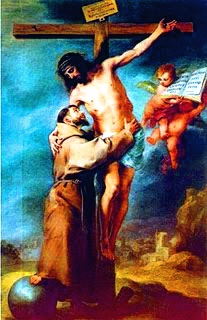 St Francis was the son of Peter Bernardone, a wealthy merchant of Assisi. Peter intended that his first-born should follow him in his career. But Francis was in no way avaricious as was his father. Rather, he was very generous and in gay good humor readily disposed of anything at his command.

Our Lord, whose delight it is to show mercy to the merciful, intended to tear St Francis away from the danger of worldly pleasures and draw him to Himself. He permitted Francis to become seriously ill.

As St Francis lay in the solitude of the sick chamber, exhausted in body, his soul was being prepared by God for higher things. He felt a great longing for perfection, and heroic self-conquest was needed as a foundation for that edifice.

When St Francis recovered his health, he was one day crossing the plain of Assisi on horseback, when he met a leper. The unexpected sight filled him with horror, and he was minded to turn back. But he remembered his resolution, dismounted, and hastened to kiss the hand of the leper and then pressed on alms into it. As he remounted and turned to salute the leper once more, there was no one to be seen anywhere on the plain. It was Christ Himself who had appeared to Francis in the form of a leper.

St Francis so loved the poor that he frequently associated with them. Complying with a divine command, he also begged stones to repair three ruined churches. His father was enraged at the strange conduct, and had his son brought before the bishop of Assisi. There Francis returned to his father not only the money he had but the clothes he wore, saying:

"Now I can truly say, Our Father, who art in heaven."

The bishop gave him an old gardener's cloak, on the back of which Francis drew a cross with a piece of white chalk. He now begged our Lord to make known to him His will regarding the future.

Soon after, St Francis was at holy Mass in the Portiuncula. Hearing the Gospel in which our Lord commissioned His apostles to carry about with them neither gold, nor silver, nor two coats, nor shoes, the heart of Francis was filled with joy, for he recognized in it the will of God regarding his own life. In a coarse penitential garb, girded with a cord, without shoes, he entered upon a life of complete poverty and began to preach penance. This occurred in the year 1208. Francis was then about 26 years old.

Several companions soon joined him. When there were eleven in number, he went with them to Rome, where Pope Innocent III gave his approval to the new order. They lived in the severest poverty and in brotherly harmony, preaching penance to the people both by their example and by their words. The holy founder called them Friars Minor, so that they might always regard the virtue of humility as the foundation of perfection. He himself was so humble that, when the people proclaimed him a saint, he called himself the greatest sinner.

"For," St Francis said, "if God had given the greatest criminal the graces He has given me, he would have used them to better advantage than I have done."

The order grew rapidly. In 1219, at the renowned Chapter of the Mats, more than 5,000 brethren were gathered together. As Christ sent His apostles to preach the Gospel to all nations, so Francis sent out his brethren. He himself courageously faced the Sultan of Egypt and announced to him that salvation could be found only in Christ.

St Francis of Assisi was a wonderful director of souls. Thomas of Celano tells us, "...by means of a revelation of the Holy Spirit, Francis knew the actions of his absent brothers, laid open the secrets of their hearts, and explored their consciences! Of how many he admonished in their sleep, commanded them things to be done, forbade things not to be done!"

In order to open the way of perfection for all who wished to imitate his life, Francis established a Second Order headed by St Clare, and a Third Order, for people of both sexes living in the world. His love for souls inspired him to labor for all his fellowmen.

Still, his desire to be more intimately united with God caused St Francis to retire again and again to a solitary place to fast and pray. He was consumed with ever increasing love for the highest and greatest Good.

"In the beauty of things," says St Bonaventure, "he saw the Author of all beauty, and followed in the footsteps of his Beloved, who has imprinted His image on all created things."

Drunk with love, he could call upon creatures to extol the Creator with him, and the birds joined him in singing the praises of God.

There were many other great saints living at this time. St Fernando III was King of Castile and Leon, St Louis IX was King of France, and Saint Dominic was converting the heretics. Both Saint Francis and Saint Dominic embraced holy poverty, and through their prayer, preaching and example, in less than two decades they restored and regenerated all of Christendom. The preaching of the Franciscan friars and Domincan priest elevated the culture and spread scholasticism wherever they went. Their work, and the work of their orders, goes on even in our own time.

It was above all the passion and death of Christ on the Cross that filled his heart with love of his Saviour, and he strove to become as similar to the object of his love as possible. Two years before his death, on Mount La Verna, the crucified Saviour appeared to Francis in the form of a seraph and impressed on his body the marks of the five sacred wounds.

St Francis, of course, was also a great miracle worker. There are too many to tell here, but let a few suffice to tell the tale of his sanctity.

On one occasion a great multitude followed St Francis, and they helped themselves to the grapes they found growing in a church vineyard. The pastor of the church began to regret that the saint had stayed with him, for the vineyard was nearly destroyed. St Francis learned of the pastor's inner thoughts through supernatural means, and so asked the pastor how many measures of wine the vineyard typically produced. The pastor responded twelve, so St Francis asked the priest to be patient with the people for the love of God, promising that the vineyard would produce twenty measures that year. By the time St Francis left there were only a few meager grapes to be found, but the priest placed them in the wine press anyway. As St Francis had promised, the priest miraculously obtained twenty measures of the very best wine.

Another time, when St Francis was staying at Gubbio, the saint learned of a large and fierce wolf that was eating animals and even human beings. People lived in such fear of the creature that they carried weapons with them everywhere they went. St Francis determined to go find the wolf, and a few of the bravest townsmen went with him. St Francis did find the wolf, for it bared its teeth upon seeing him and charged. St Francis was unmoved, making the sign of the cross in the direction of the closing wolf.

The wolf closed his mouth and slowed, creeping up meekly to St Francis. The Saint commanded the wolf never to hurt anyone again, and then made a bargain with the wolf that the people of the town would bring it food if it would not attack them. The wolf remained docile, following St Francis back to town where he explained the bargain he had made with the wolf, which the towns-people kept.

Francis knew in advance the day of his death. Painful suffering preceded it, but Francis thanked God for it and declared himself ready to suffer a hundred times more if God so willed.

Prepared by all the consolations of Holy Church, and lying on the bare ground in imitation of his Saviour's death on the cross, Francis passed to his heavenly home on October 3, 1226.

Thomas of Celano was an eye-witness, and he wrote: "...his flesh, which before had been dark, was now gleaming with a dazzling whiteness and giving promise of the rewards of the blessed resurrection by reason of its beauty. They saw, finally, that his face was like the face of an angel, as though he were living and not dead; and the rest of his members had taken on the softness and pliability of an innocent child's members...his skin had not become hard, his members were not rigid. And because he glowed with such wondrous beauty before all who looked upon him, and his flesh had become even more white, it was wonderful to see. In the middle of his hands and feet, not indeed the holes made by the nails, but the nails themselves formed out of his flesh and retaining the blackness of iron, and his right side was red with blood. These signs of martyrdom did not arouse horror in the minds of those who looked upon them, but they gave his body much beauty and grace.