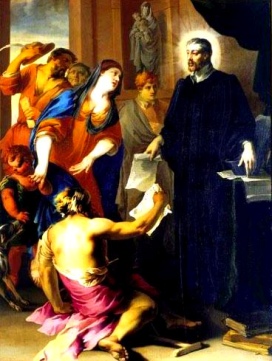 Yves, or Ivo, was born of noble parents in Brittany in 1253. The lessons his pious mother instilled in the heart of the boy through Christian training, preserved him amid the grave dangers to which he was exposed during his student years at Paris and Orleans.

To the study of theology Yves joined the study of civil and ecclesiastical law. He applied himself so diligently to his studies that his instructors and fellow students marveled at his knowledge, but he was much more intent on acquiring virtue and piety. Not only did he go to church in the morning to attend holy Mass, but every evening he performed his devotions there. Besides studying his textbooks, he delighted in reading the lives of the saints, and the reading drew him very strongly to imitate them. He drank no wine, and his pastime consisted in visiting the sick in the hospitals.

After he had completed his studies, Saint Yves of Brittany was assigned to the diocese of Rennes, and later his bishop appointed him judge of the church court of his native diocese of Treguier. Although Yves in his humility did not desire it or ask for it, the bishop of Treguier also ordained him a priest and entrusted him with a parish.

As judge, the young priest-lawyer always let justice hold sway without regard to persons, and the wisdom of his decisions was remarkable. He did not derive this wisdom only from his learning, but he prayed often and long for enlightenment. Before making grave decisions, he always said a Mass in honor of the Holy Ghost. By preference he helped the poor, the widows, and the orphans to obtain justice, even when the duty of his office did not oblige him to help. As a son of St Francis, to whose Third Order he had been admitted, he felt particularly attracted to the poor, and interested himself in their needs with such zeal that he was called the attorney of the poor.

The high office with which Yves was entrusted and the honors which were accorded him because of it, were not to his taste. He begged the bishop until he yielded and allowed him to resign his office, for he wished to take personal care of his parish, which until then had been attended by an administrator.

Yves arranged his household and his wardrobe in the simplest fashion. All his time and labor he devoted to his flock, to whom he was a true shepherd and father. He strove to uproot vices of long standing, especially usury and immorality, and by his zeal, charity, holy example, and fervent prayers, he succeeded. Here, too, the poor were his special friends. His home was an open guest-house for the poor, the blind, the lame, and the helpless of the entire vicinity. During a famine God almighty came to the assistance of his generosity by visible miracles. A flour bin which a domestic had found empty was found filled when Yves himself went with the domestic to examine it. Once he fed two hundred hungry persons with seven loaves of bread; at another time he fed twenty-four persons with a small loaf.

Saint Yves of Brittany's labors and his strict life sapped all his energy. He was hardly fifty years old when he felt his end nearing. Fortified with the last sacraments, he commended his soul to the hands of his Creator and died with a smile on May 19, 1303. His body was entombed in the cathedral of Treguier. The finest eulogy was tendered him by the poor, who flocked thither in great numbers and raised such lamentations that all present were deeply touched.

After many miracles at his grave, Pope Clement VI added Saint Yves of Brittany to the list of saints of the Catholic Church.