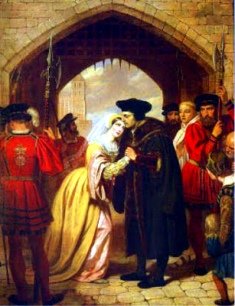 Saint Thomas More belongs to that class of Tertiaries who have grasped the true spirit of their Seraphic Father. It is a spirit of deep-seated piety and of contempt for the world, as well as of unswerving fidelity to Holy Church practiced in an exceptional degree and sealed with one's blood.

Saint Thomas was born in London in 1480. His father was a knight. St Thomas grew up as a very devout youth, and decided to become a lawyer. As an honest attorney, his services were constantly in demand, but nevertheless he always found time to attend holy Mass daily and to perform other pious practices.

As the father of a family, he was concerned that his children should be reared in the fear of God. He became famous for his book entitled “Utopia.” By means of his "Kingdom of Nowhere" he scourged in fine satire the evils that were eating their way into the Church and the State.

Through Henry VIII he became attached to the royal court and was finally appointed Lord High Chancellor. The time had now arrived in which the Tertiary was to manifest how sincerely he had grasped the spirit of the Saint of Assisi. As should be expected, Saint Thomas More continued to make his accustomed religious practices even as an important statesman. He set aside every Friday as a day of introspection. His charity was limitless.

Saint Thomas More experienced special delight in serving the priest at holy Mass, and he received Holy Communion daily. He was once told, by way of reproach, that it was unbecoming for a layman with so much work to do and so many distractions to communicate daily. But he replied:

"You are advancing the very reasons for the need of frequent Holy Communion. If I am distracted, Holy Communion helps me to become recollected. If opportunities are offered me each day to offend my God, I arm myself anew each day for the combat by the reception of the Eucharist. If I am in special need of light and prudence in order to discharge my burdensome duties, I draw nigh to my Savior and seek counsel and light from Him."

It was not long before his doom was sealed. Blinded by unholy passions, King Henry divorced his lawful wife and married Anne Boleyn, a lady in waiting at the court. When Rome justly condemned his adulterous act, the king severed his connections with Rome and set himself up as the head of the Church in England. Whoever disapproved of his conduct was doomed to die.

The first person who opposed the king was his loyal chancellor, Thomas More. He was cast into prison. There he wrote a pamphlet entitled “Death Endured for the Faith Need Cause No Fear.” When his wife endeavored to persuade him to give up his opposition and prolong his life, he asked her just how long she believed he would still live. She answered, "At least twenty years." "Indeed!" said Thomas More. "Had you said a few thousand years, that might make a difference. But surely even he would be a poor merchant who would run the risk of losing an eternity for the sake of a thousand years."

Saint Thomas More was beheaded on July 6, 1535. Pope Leo XIII beatified this great Tertiary, and Pope Pius XI canonized him on May 19, 1935.