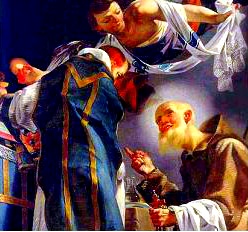 Seraphin's parents were poor in earthly goods and obscure in the sight of men. But the spirit of prayer which his mother instilled in the boy was an inheritance of priceless value. The loving lessons of his mother caused Seraphin to make the firm resolve to remain innocent and become a saint.

Saint Seraphin of Montegranaro fostered tender devotion to the Blessed Mother and occasionally visited her shrine at Loreto, not far from his home.

On the death of his parents, Seraphin was subjected to a severe trial. His brother, a bricklayer and a man of a violent temper, took him into his employ; but no matter what the boy did, he received nothing but harsh words and blows in return. Seraphin bore the cruel treatment with great patience and recognized in it the way to holiness.

Desiring to consecrate himself to the service of God, Saint Seraphin of Montegranaro entered a Capuchin convent when he was only 16 years old. The high degree of perfection he had already attained was soon noticed and admired. His brethren were edified at his humility, charity, mortification, and self-sacrifice. Punctual in performing all the duties assigned to him, he still found time to be of service to the other brothers.

He devoted the night to prayer. In the evening he would visit the Blessed Sacrament and remain there for hours absorbed in prayer and contemplation. Then he would take a short rest, after which he would get up once more to attend the midnight office. God seemed to preserve his bodily strength in a marvelous way. During a famine he ate but a fourth of his own meager meal, in order to have so much more to give to the poor. As porter of the convent, charged with providing for the poor, he once exceeded the bounds of obedience. For, as he had nothing more to give and there were still some poor waiting for help, he went into the garden and gathered a supply of the vegetables growing there.

When his superior took him to task for it, the good brother assured him that the community would in no way suffer on his account, and that and the next morning a new growth of vegetables appeared in the garden.

The miraculous power with which God rewarded the charity of His servant continued to manifest itself. Countless sick were restored to health when he made the Sign of the Cross over them. Seraphin endeavored, nevertheless, to withdraw as much as possible from contact with the world. While engaged in the quiet work about the convent, his heart was busy contemplating the sufferings of Christ. Consumed with the love of Him who shed His blood for love of us, he yearned to go to the infidels in order to shed his blood for Christ. Since his request was not granted, he made it a habit to pray:

Holy Mother, pierce me through, In my heart each wound renew Of my Savior Crucified.

Inflamed with the love of God, Seraphin departed from this life on October 12, 1604, in his 64th year. Many miracles occurred at his grave, and Pope Clement XIII canonized Saint Seraphin of Montegranaro in 1767.