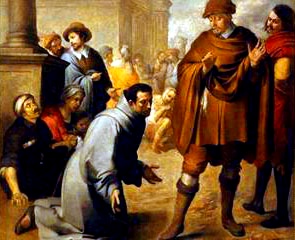 In the sixteenth century when the Faith, especially in Germany, was so mightily shaken by the so-called reformers, when the Sign of the Cross was abolished as a superstitious practice, almighty God permitted this very Sign of the Cross to shine with special power and radiance, in order to strengthen the Faith in another country. This was Spain, and it was through the great miracle worker of the sixteenth century, St Salvator of Horta.

Saint Salvator of Horta was born of poor parents in the year 1520. Orphaned when still quite young, he tended cattle and was later sent as an apprentice to a shoemaker in Barcelona. His devout heart, however, was constantly prompting him to consecrate himself to God; so, when he was twenty years old, he entered the Franciscan Order as a lay brother. He distinguished himself among his brethren by rigorous mortification, profound humility, and extraordinary simplicity.

Almighty God, who chooses the lowly to make known the wonders of His power, manifested His power in Salvator at the very beginning of his religious life.

Saint Salvator of Horta was sent to assist the brother in the kitchen, and one day, when the cook was ill, Salvator had to undertake the entire round of duties alone. When it was close to the noon hour, the Father Guardian went to the kitchen to see what Brother Salvator had prepared. He found the kitchen locked. After looking for Salvator for a considerable time, he finally found him kneeling before the Blessed Sacrament, deeply absorbed in prayer.

Saint Salvator of Horta had been there since early morning without being aware of it. The superior reproved him severely, and Salvator acknowledged his guilt amid many tears, begging for a severe penance. How astonished, however, were both men when they arrived at the kitchen and found all the food ready to be served; the angels had substituted for Salvator.

After pronouncing his vows, Salvator was sent to the convent at Tortosa. Although he was assigned in turn to the duties of cook, porter, and quester of alms, he was nevertheless continually recollected and intimately united with God.

While gathering alms, Saint Salvator of Horta often came upon sick people for whom his prayers were requested. He would make the Sign of the Cross over them, and immediately they were healed. News of this fact soon spread abroad and may sick were brought to the convent. All were restored to health through the Sign of the Cross which Brother Salvator made over them.

The concourse of sick people, however, finally became so great that it disturbed the good order in the convent. So the superiors sent Brother Salvator to the nearby convent of Horta, where he spent the greater part of his religious life; hence his surname “of Horta.”

Although the transfer was made in perfect secrecy and no one had been informed of it, the sick presented themselves at the convent at Horta already in the first days after his arrival there, and their number increased daily. The deaf, the blind, the dumb, the lame, the epileptic, came; the paralytic, the dropsical, those afflicted with fevers, and sufferers of every type were brought to him on beds, so that Brother Salvator might restore their health.

Usually there were as many as two thousand a week, sometimes that many in one day, and once, on the feast of the Annunciation of the Blessed Virgin, as many as six thousand made their appearance.

One time the grand inquisitor, a renowned theologian, whose duty it was to guard the purity of the Faith, came in order to learn whether anything occurred there that savored of superstition. Without giving any indication of his rank, he took his station at a corner of the church were the sick were expecting the healing hand of Brother Salvator.

When the good religious arrived, Saint Salvator of Horta had the sick make way for him as he passed through their ranks till he reached the grand inquisitor. There he reverently kissed the latter’s hand, and begged him to come to the upper church, where he could watch the entire proceedings. Astonished at finding himself recognized, the inquisitor was already assured of the power from on high which held sway there. Nevertheless, he followed the brother.

Salvator began, as usual, to admonish the sick to examine their conscience and to receive the sacraments of penance and of the Holy Eucharist worthily. Then he blessed them with the Sign of the Cross while he called upon the Blessed Trinity and imposed on them a few prayers in honor of the Immaculate Conception of the Blessed Virgin Mary, to whose intercession he ascribed all the cures. The sufferers were then all suddenly cured, except, as Salvator had foretold, those who were not sincere in their conversion.

In order to test the humility of the brother and to preserve him in it, his superiors frequently imposed heavy trial, but he always remained an obedient, humble, and contented religious. A prominent gentleman once warned Salvator that he should be on guard against pride and presumption. The good brother answered:

“I always think of myself as a sack full of straw; the sack is indifferent as to whether it lies in a stable or is brought into a magnificent room.”

The last two years of his life were spent on the island of Sardinia, and there he died in the convent of Cagliari on March 18, 1567. Innumerable miracles occurred also at his grave. The uninterrupted devotion to the saint was confirmed by Pope Clement XI. Saint Salvator of Horta was canonized by Pope Pius XI in 1938.