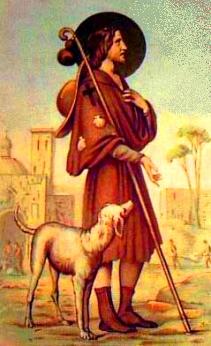 Saint Roch was the only son of a wealthy nobleman in France, who seems to have been governor of the town of Montpellier. In answer to the persevering prayers of the parents, this child was granted to them. His future career was indicated by a birthmark in the form of a red cross that was deeply marked on his breast.

The parents raised St Roch in a devout manner. Proof was given when, at the age of 20, he lost both parents. He did not use the immense fortune he inherited for his personal benefit, but he sold all the personal property and distributed the proceeds among the poor while he transferred the ownership of the real estate to his uncle. This done, he joined the Third Order of St Francis, put on a pilgrim's garb, and journeyed to Rome to visit the tombs of the Apostles.

When he arrived at Acquapendente in northern Italy about the year 1315, he found that an epidemic had broken out there and was making fearful ravages. Saint Roch did not hasten on, as many another person, fearful for his life, would have done, but according to the example of Christ and the admonition of the beloved disciple (1 John 3:16), he offered his life in the service of his brethren in Christ.

Saint Roch went to the hospital of St John, which was filled with the plague stricken, and offered his services to the brothers there. He also went to individual homes and sought out the sick, serving them without rest by day and by night. God rewarded his heroic charity by causing many to be cured at the mere Sign of the Cross which Saint Roch made over them. When the plague abated, Roch proceeded on his journey to Rome.

In Rome, too, an epidemic had broken out. Besides visiting the holy places, Saint Roch again devoted himself to the care of the sick, many of whom were miraculously cured by him. He performed the same services in many other towns of Italy until he arrived in Piacenza and was himself stricken with the dread disease. In the very hospital where he had cured so many sick, he was now looked upon as an intruder, who as an outsider had no right to claim a place there.

In order not to be a burden to others, he arose, left the house, and with the support of a staff dragged himself wearily to a neighboring woods. There he came upon a dilapidated hut with a bit of straw, where he lay down, thanking God for the quiet lodging.

God Himself provided for his nourishment. As He once took care of Elias, sending him bread by means of a raven, so He now sent bread to Roch by means of a dog from a neighboring country house.

The sick man gradually recovered. When he had regained sufficient strength, he was divinely inspired to return to his native town. There furious warfare was raging. The soldiers whom he encountered thought he was a spy. He was led before the governor of Montpellier, his own uncle, who, however, did not recognize his nephew in the emaciated prisoner, and had the supposed spy cast into prison.

Saint Roch did not say a word in his defense; he wished, like Christ, to accept in silence whatever heaven had ordained for him. Because of the disturbances of the war, he was almost completely forgotten, and languished in prison for 5 years. Then death put an end to his trials on August 16, 1378.

When he felt that his end was drawing near, Saint Roch asked that a priest might come and administer the last sacraments. The priest, on entering the prison, beheld it supernaturally lighted up and the poor captive surrounded with special radiance. As death claimed its victim, a tablet appeared on the wall on which an angelic hand wrote in golden letters the name of Roch, and the prediction that all who would invoke his intercession would be delivered from the plague.

Informed of all that took place, Saint Roch's uncle came to the prison and, shortly after, also the governor's mother, that is, Roch's grandmother. She identified the dead man as her grandson by the birthmark of the red cross on his breast. They gave him a magnificent funeral and had a church built in his honor, in which his body was entombed. His veneration was approved by several popes and soon spread throughout Europe. He was canonized by Pope Urban VIII. He is the patron against contagious diseases.