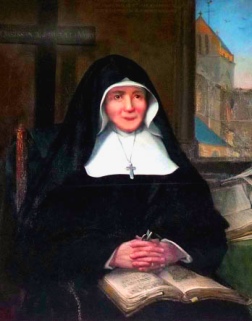 Julie Frances Catharine Postel, the daughter of a rope manufacturer, was born at Barfleur in Normandy on November 28, 1756. After her elementary education, she received further training from the Benedictine nuns at Volognes. There she decided to devote her entire life to the service of God and her neighbor, and privately took the vow of chastity.

Five years after she opened a school for girls in La Bretonne, the French Revolution broke out. During the persecution Saint Mary Magdalen Postel played a heroic part in helping the priests who were in hiding or in prison and in strengthening the faith of the loyal Catholics of Barfleur. She was authorized to keep the Blessed Sacrament in her house, and when conditions grew worse to carry the Blessed Sacrament on her person and even to administer Holy Viaticum to the dying in cases of emergency. The Jacobins often suspected her, but she enjoyed the special protection of God and no harm came to her.

After the storm had passed, Saint Mary Magdalen Postel helped to restore the Faith by catechizing young and old, and began to teach school once more at Cherbourg. With the approval of the Vicar Louis Cabart, she and two other women established a religious community there in 1805; and two years later they and another who had joined them pronounced their vows. They called themselves the Poor Daughters of Mercy and observed the rule of the Third Order of St Francis.

During the first thirty years, the new Franciscan sisterhood encountered many bitter disappointments and trials, but Mother Mary Magdalen, as Julie was now called, persevered courageously in her vocation. The motherhouse of the congregation was transferred in 1832 from Cherbourg to the former Benedictine abbey of St Sauveur le Vicomte in Courtance; and in 1837 the Vicar General Delamare substituted, in place of the Third Order rule, that of St John Baptist de la Salle, the founder of the Christian Brothers. Henceforth the members of the community were called Sisters of Mercy of the Christian Schools. During the last few years of her life, Mother Mary Magdalen saw her sisterhood expand and achieve great things. It was at her instigation also that the Vicar General Delamare in 1843 founded the School Brothers of Mercy at Montebourg.

Mother Mary Magdalen was almost ninety years old when she died on July 16, 1846. Her sisterhood continued to grow and spread also to other countries, especially England and Italy. In 1862 it was established in Germany when four school teachers adopted the statutes of these sisters; but in 1920 this foundation became independent, with its motherhouse at Heiligenstadt. The original French sisterhood received papal approbation in 1901. Mother Mary Magdalen was canonized in 1925 by Pope Pius XI.