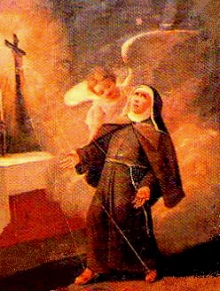 Saint Anna Maria Rosa, as Saint Mary Frances was christened, was born in Naples in 1715 of a family that belonged to the middle class of society. Her mother, a devout and gentle woman, who had much to contend with from her hot-tempered husband, was quite worried before the birth of this child. But St John Joseph of the Cross, who lived in Naples at that time, calmed her and recommended special care of the child, as it was destined to attain to great holiness.

Saint Mary Frances was scarcely 4 years old when she began to spend hours in prayer, and sometimes arose at night for this purpose. Such was her desire to know the truths of the Catholic Faith, that an angel appeared to her and instructed her regularly.

Saint Mary Frances had not yet attained her 7th year when she desired to receive holy Communion. Her pastor marveled at her knowledge of the Faith, as well as her ardent desire for the Bread of Angels, and felt that he could not deny her the privilege. In fact, it was not long before he permitted her to receive daily.

Meanwhile, although physically of a very delicate constitution, the little saint was making herself useful to her parents by assisting them in their work. Her father, a weaver of gold lace, was anxious to have his children help as early as possible. He found that Saint Mary Frances was not only the most willing but also the most skilled in the work.

Mary Frances was 16 years old when a rich young man asked her father for her hand. Rejoicing at the favorable prospect, her father at once gave his consent.

But when he told Mary Frances about it, he was amazed to hear her, who had never contradicted him, declare her firm intention of espousing only her heavenly Bridegroom, and asking his permission to become a Tertiary. He became so enraged that he seized a rope and whipped the delicate girl unmercifully, until her mother intervened. He then locked her in a room, where she received only bread and water, and no one was permitted to speak to her.

Saint Mary Frances considered herself fortunate to be able to offer her divine bridegroom this early proof of her fidelity; she regarded the trial as a pre-nuptial celebration. The earnest representations of a priest made her father, who after all was a believing Christian, realize that he had done wrong; and he consented that his daughter take the Tertiary habit and serve God as a consecrated virgin at home, as was customary in those days.


Filled with holy joy, Saint Mary Frances now received the habit and with it the surname "of the Five Wounds." This name was prophetic of her subsequent life.

At home Saint Mary Frances had much to endure. Her father never got over it that he lost a wealthy son-in-law. When God favored her with unusual graces -- she was sometimes granted ecstasies at prayer and suffered our Lord's agony with Him -- her own brothers and sisters insulted her as an imposter. Even her confessor felt obliged to deal harshly with her. For a long time she could find consolation nowhere but in the wounds of Christ.

At last her confessor perceived that it was God who was doing these things in Mary Frances. Since her mother had died meanwhile, he saw to it that she found a home with a fellow Tertiary. There one day, as she herself lay ill, she learned that her father was near death; and she asked almighty God to let her suffer her father's death agony and his purgatory. Both requests were granted her.

Although she suffered continuously, our Lord also gave Mary Frances great graces and consolations. She received the marks of the wounds of Christ and was granted the gift of prophesy and of miracles. When Pius VI was crowned pope in 1775, she beheld him in a vision wearing a crown of thorns. Pope Pius closed his life 24 years later as a prisoner of the French Revolution at Valence.

Mary Frances also prophesied the tragic events of the French Revolution; and God heard her prayer, asking that she be taken from this world before they would happen. She died on October 6, 1791, kissing the feet of her crucifix. God glorified her by many miracles.

Saint Mary Frances was beatified by Pope Gregory XVI, and canonized by Pope Pius IX in 1867.