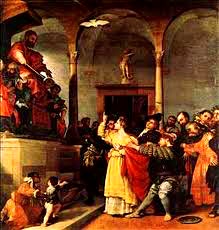 Saint Lucy was descended of a noble family of Syracuse, which was then regarded as the principal city of Sicily. She lost her father in her infancy; but Eutychia, her mother, took care to educate her properly, and to instruct her well in the doctrines of our holy faith. When our saint arrived at a proper age, her mother began to think of giving her in marriage, but Lucy, who had consecrated her virginity to Jesus Christ, awaited only a favorable opportunity to reveal her resolution to her mother.

The opportunity soon presented itself. Eutychia was afflicted for many years with a flux of blood, without being able to find any effectual remedy. Saint Lucy therefore, persuaded her to repair to the tomb of Saint Agatha, martyred a half century before in Catania, where the Lord was pleased to work many miracles, and there to implore her cure. When they arrived at Catania, they prostrated themselves in prayer before the sepulcher of Saint Agatha, where Lucy, perhaps from fatigue of the journey, was overpowered with sleep.

The blessed martyr appeared to her, and as we read in the Roman Breviary, said: “Lucy! Why dost thou demand through my intercession that which, by thy faith, thou canst thyself obtain for thy mother?”

She then assured Lucy that God would work the desired cure, and that, for having preserved her virginity inviolate, God would reward her in Syracuse with the same glory she herself had received in Catania.

Saint Lucy, animated by this vision, was the more confirmed in her resolution of remaining always consecrated to Jesus Christ, and told her mother to speak to her no more of marriage, but to distribute her fortune among the poor. Eutychia answered, that at her death she would bequeath all to her, and that she might do with it as she pleased; but Saint Lucy replied, that gratitude for her miraculous cure ought to induce her willingly to deprive herself during life of that which, at her death, she should necessarily leave behind.

The mother consented, and when they returned to Syracuse, they commenced to sell their property, and to distribute the proceeds among the poor. Saint Lucy’s suitor perceiving this, complained to Eutychia; but he found that his representations were totally ineffectual, and, in his rage, accused her before the governor, Paschasius, as being a Christian, contrary to the edicts of Diocletian and Maximian.

The saint was accordingly arrested and brought before the governor, who endeavored to persuade her to sacrifice to the idols; but Saint Lucy replied, that the sacrifice most agreeable to God was the relief of the poor, in which she was actually engaged and that she was prepared to sacrifice even her life.

Paschasius in his rage told her that she was impurity itself.

The saint replied: “No, thou art impurity, since thou dost endeavor to corrupt Christian souls, alienating them from God, to serve the devil, - wrongly preferring, as thou dost, the goods of this world to those of heaven.”

Paschasius; “Torments shall stop thy mouth.”

Lucy: “Words shall never be wanting to the servants of God, since the Lord hath promised that the Holy Ghost shall speak through them.”

Paschaius: “Then the Holy Ghost is within thee?”

Lucy: “St Paul hath said, that those who live chastely and piously are the temples of the Holy Ghost.”

“Since this is the case,” said the tyrant, “I will cause thee to be brought to an infamous place, in order that the Holy Ghost may leave thee.”

The saint replied: “The body receiveth no stain when the will is averse to sin; on the contrary, the violence you meditate would double my crown.”

The governor then threatened the most horrid tortures, in case she continued obstinate.

The saint intrepidly exclaimed: “Behold my body ready to suffer every torture! Why dost thou delay? Begin the execution of that which the devil, thy father, prompts thee.”

Paschasius, maddened with rage, ordered that she should instantly be brought to the place of infamy, in order that she might first lose the honor of virginity, and then be deprived of life.

The guards endeavored to execute this command, but found that God had rendered her so immovable that all their exertions were insufficient to drag her from the spot.

Paschasius in astonishment exclaimed: “What incantation is this?”

The saint replied: “This is not an incantation, but the power of God. Why dost thou fatigue thyself? Dost thou not manifestly perceive that I am the temple of the Lord?”

Paschasius, more confused and infuriated than ever, ordered a great fire to be kindled round the saint that she might be burned.

Saint Lucy, nothing daunted, said to the tyrant: “I will pray to the Lord Jesus Christ that the fire may not injure me, in order that the faithful may witness the divine power, and that the infidels may be confused.”

The friends of Paschasius, unwilling that the people should witness any further miracle, advised him to have her beheaded; but after having been tortured in many other ways, her throat was pierced with the point of a sword.

The saint did not expire immediately; she threw herself on her knees, offered her death to God; and having foretold that peace would soon be restored to the Church, consummated her martyrdom in the year 303 or 304. Her name is inserted in the Canon of the Mass.