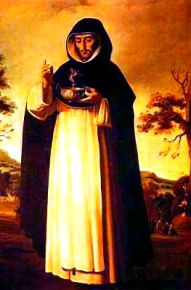 
Believed to be a relative of St Vincent Ferrer, Saint Louis Bertrand, on the very day of his birth, January 1, 1526, was baptized at the same font where St Vincent received the sacrament a century and a half before him.

Saint Louis Bertrand was exceptionally pious as a child, reciting daily the Office of Our Lady and attending different churches in order to conceal from the knowledge of others his frequent reception of the Holy Eucharist. He was received into Saint Dominic’s order when nineteen years old and was ordained before he was twenty-two. He filled many offices in the Order, most notably that of master of novices. By the practice of outstanding virtue, self-denial and penance, he furnished for his novices a perfect model for their imitation.

In the year 1562, Saint Louis Bertrand was sent from his native Valencia, Spain, to South America, where he worked for seven years among the Indians in the northwestern part of the continent, among the tribe of the Caribs in the Caribbean Islands, and among the natives on the Isthmus of Panama. During these missionary years he was favored with the gift of tongues. While speaking to the natives in Castilian, he was understood by all and often spoke in languages with which he was naturally unfamiliar. His preaching was accompanied by many miracles and prophecies. He once raised a girl to life by the application of a Rosary and often attributed to the intercession of Our Lady the miraculous powers he manifested.

After returning to his native land, Saint Louis Bertrand again occupied administrative positions in the Order and won the esteem and friendship of St Theresa of Avila. The Saint died a holy death after suffering a long and painful illness. Many prodigies accompanied his passing. During the process of beatification, witnesses testified that shortly after his death a heavenly perfume arose from his body, that a light which glowed for several minutes proceeded from his mouth and illuminated his whole cell, and that seraphic music was heard in the church before his funeral.

The body of the Saint, which remained incorrupt for over three hundred fifty years, was maliciously destroyed during the Spanish revolution of 1936.

*from the book, The Incorruptibles, by Joan Carroll Cruz, TAN books