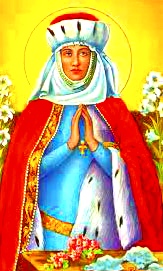 The royal dynasty of Hungary in the 13th century has presented the church with a galaxy of saintly women. Among the most brilliant we find Blessed Kinga (or Cunegunda), daughter of King Bela IV, and niece of St. Elizabeth of Hungary. Other aunts of this saint were St Hedwig and Blessed Agnes of Prague. Blessed Yolande and the Dominican St. Margaret were her sisters. St Elizabeth of Portugal and Blessed Salomea were her cousins once removed, and she was the aunt of the holy bishop Louis.

Blessed Kinga was born in 1224, and from her birth seemed destined far more for heaven than for earth. As an infant she was heard to say distinctly, "Hail, Queen of Heaven, Mother of the King of Angels!" When she was carried to church, she would keep her eyes raised to heaven during the holy sacrifice of the Mass and would bow her little head whenever she heard the holy names of Jesus and Mary. On Wednesdays and Fridays she would take food but once a day.

Blessed Kinga was only 15 when at her parents' request she gave her hand in marriage to Boleslaus, duke of Cracow, who later became king of Poland. The angelic virgin, however, spoke to her spouse so convincingly of the excellence of virginity, that he resolved to embrace a life of continence. Later they made a vow of perpetual chastity before the bishop of Cracow, and persevered in it for forty years of their married life. For this reason history has surnamed Boleslaus the Chaste, while the Church has conferred the title of virgin on Kinga.

At the same time Queen Kinga occupied herself with all the duties of a true mother. She took upon herself the care of her sister Yolande, who was then only 4 years old, and reared her in true holiness. Faithfully imitating her aunt St. Elizabeth, she evinced a truly maternal solicitude for the poor and the oppressed, and visited the sick in the hospitals, nursing them with the tender care of a sister of mercy.

As the first lady of her country, the constant object of her care was the welfare of her people. At that time Poland was suffering from a scarcity of salt. In answer to the prayers of the queen, valuable salt mines were discovered which not only provided for the wants of the Polish people but permitted considerable quantities of salt to be exported. Desirous of increasing the number of heavenly patrons of her kingdom, she obtained from the Holy See the canonization of St Stanislaus, bishop of Cracow, and of her aunt St Hedwig, duchess of Silesia. She and her husband established several convents as sanctuaries of prayer for the welfare of the country.

When King Boleslaus died in 1279, the people of the kingdom strove in vain to make Queen Kinga retain the reins of government. The humble virgin replied that it was her intention to retire from the world and consecrate herself wholly to Jesus Christ. She and her sister Yolande, who had been left a widow some months before, received the habit of St Clare in the convent at Sandek.

When she entered the monastery, which she herself had founded, she said to the abbess and the sisters, "Forget what I once was; I come only to be your servant." It became her greatest pleasure to do the most menial tasks.

Almighty God tested her humility by permitting her to become the object of suspicion. She bore the trial heroically, and was then vindicated by miracles.

Kinga was elected abbess, and in this capacity governed her daughters with great prudence and maternal charity. Her community was suffering from a scarcity of water. She pleaded with God to come to her assistance. Then she went to a neighboring brook and with her staff traced the course that it should henceforth follow. The water flowed obediently to her monastery.

In her last illness she was favored with the most intimate union with her Divine Bridegroom. When she had received the last sacraments and her sorrowing daughters were reciting the prayers for the dying, she suddenly exclaimed: "Make room, do you not see our Father Francis coming to assist me?"

It was on the 24th of July, 1292, that her virginal soul took its flight to heaven. Fragrant odor filled her cell, and her face became marvelously beautiful. Numberless miracles occurred at her tomb. Devotion to her was approved by Pope Alexander VIII in the year 1690; and with the approval of Pope Clement XI she was chosen in 1715 as the special patron of the Poles and Lithuanians.