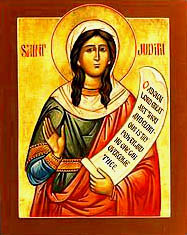 Saint Judith of Prussia, also known as Jutta, born in Thuringia, was a member of the very noble family of Sangerhausen with which the dukes of Brunswick were related. She was espoused to a nobleman of equal rank, but in the married state she was more intent upon virtue and the fear of God than upon worldly honor.

In the beginning the piety of Jutta displeased her husband. But later he learned to value it and was heart and soul with her in her pious endeavors. He made a pilgrimage to the holy places in Jerusalem and died on the way. Saint Judith of Prussia received the news of his death with deep sorrow, but also with the most perfect conformity with the will of God, and resolved to spend her widowhood in a manner pleasing to God.

After Saint Judith of Prussia had provided for her children, who had all been reared in the fear of God, Jutta, with the consent of her confessor, disposed of the costly clothes and jewels she had until then worn in accordance with her rank, as well as all her expensive furniture. She entered the Third Order of St Francis, and wore the simple garment of a religious. She devoted herself entirely to the care of the sick, especially the lepers, and to the poor, whom she visited in their hovels and provided with all necessities. The crippled and the blind she led by the hand to her home and took care of their needs.

Many people laughed at the distinguished lady who made herself the servant of the poorest. But she recognized in the poor her Divine Lord, and deemed herself happy and highly honored that she could render them such services. Once when she was at prayer, Christ Himself appeared to her and said to her lovingly:

“All My treasures are yours, and yours are Mine.”

That spurred Jutta on to still greater devotion in serving the poor of Christ.

Another time when she was ill and apparently close to death, Our Savior again appeared to her and gave her the choice of entering into glory at the time, or of suffering still more out of love for Him. Saint Judith of Prussia chose suffering. Our Lord gave her strength again to be up and about, but He now destined her for a spiritual work of mercy.

On the eastern boundary of Germany, at the mouth of the Vistula, the Prussians were still living as pagans. St Adalbert, archbishop of Prague, had indeed attempted to convert them to Christianity, but all in vain; he was martyred in 997. Since 1226 the German Order of Knights labored to bring these stubborn pagans under the yoke of Christ. To offer assistance in the great labor which this undertaking required, God wished someone to pray.

By divine inspiration, Saint Judith of Prussia went into this neighborhood about 1260, and built a little hermitage near a large body of water. There she prayed unceasingly for the conversion of the Prussians. The Christian inhabitants of the neighborhood sometimes beheld her raised high in the air in the fervor of her devotion. She had as her confessor the Franciscan Father John Lobedau, who died in the odor of sanctity, and later the bishop of Kulm.

After Jutta had lived here for four years, her holy life came to a close. With deep contrition she again confessed to the bishop all, even the smallest, faults of her entire life, received the holy sacraments, and surrendered her soul to God with the words, “It is consummated.” Her body was brought to the church at Kulm, where without being informed, so many people at once gathered as had not been seen in that city for many years. The church was filled with a wonderful odor.

Since very many miracles were wrought at her grave, a special chapel was built in her honor, in which Jutta has been venerated for centuries as the special patron of Prussia.