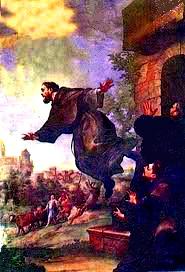 St Augustine says: "Do you wish to become great, then begin by being small." God often deals in that way with His saints. He often permits the most glorious saints to begin in the deepest lowliness.

Saint Joseph of Cupertino in the old kingdom of Naples, is an example in point. His father was a humble carpenter, who has contracted very heavy debts and was in very straitened circumstances at the time Joseph was born. His mother was very strict with him. He used to say in later life that he made his novitiate while still a child.

Nevertheless Saint Joseph performed additional penances and appeared to have been given a body merely for the purpose of mortifying it. Even as a child he lived in close union with God, so that he dwelt in heaven rather than on earth.

In time he was sent to learn a trade, but it was soon noticed that this was not his vocation. He was eventually invested with the Franciscan habit among the Capuchins, but was soon dismissed because of his awkwardness. The result was that his own relatives turned him out as a useless creature and a disgrace to his family.

Finally, the Conventuals took pity on the young man who so humbly pleaded for admission and employed him to take care of the convent mule. In this lowly service his virtues, especially his humility, obedience, and piety, shone forth with such brilliance that his superiors received him among the clerics, and within three years he was ordained a priest.

Saint Joseph of Cupertino's natural knowledge was of small account, for his efforts to learn by study were never successful. Still, it was soon perceived that he possessed much infused knowledge, so that even great theologians marveled at it. His life was one of uninterrupted union with God. Everything in nature lifted him up to heaven and to the supernatural.

Not only his spirit, but also his body, was so frequently raised above the earth in holy rapture and remained in that position for so long a time, that his biographer declared he spent more than half his religious life above the earth. Sometimes he flew to the objects of his devotion in swiftest flight.

On an elevation near the convent three crosses had been erected. Repeatedly, when he looked at them, he would rise in the air with a cry and fly to the cross in the center, embracing it and remaining in that position until the end of the ecstasy. On another occasion, when he visited the Basilica of St Francis, he saw a painting of the Mother of God high up in the vault of the church; at once his body rose into the air, and he kissed the image with tender devotion.

At holy Mass Saint Joseph of Cupertino was usually lifted in the air and remained there swaying over the altar for hours at a time. For that reason, he usually said Mass in the convent chapel rather than in the church.

What impression these ecstasies made on witnesses may be deduced from the story of Duke John Frederick of Brunswick. In 1649 he once attended the Mass offered up by Father Joseph. He was so impressed by the ecstasy that he was convinced of the truth of the Catholic faith and two years later made his profession of faith before Father Joseph himself.

Saint Joseph of Cupertino sought to honor the Mother of God by the frequent recital of the praises contained in the Litany of Loreto. Once, when the shepherds with whom he prayed the Litany each Saturday in a chapel near the monastery at Grottella, were hindered from coming, he called with a loud voice to the sheep which he could see from afar, "Come hither, to revere the mother of your God and my God."

At these words the sheep, which were so far distant from Joseph that his voice could not have reached them, ran towards the chapel, without regarding the cries of the shepherd boys, and when they had come to the chapel, the saint joyfully began the Litany. The animals replied in their own way to each praise which he uttered, so that, for instance, when he said "Holy Mary," all cried, "Baa!" and in this manner completed the Litany. On receiving the saint's blessing, they gambolled back to their pastures.

Because these visions were so extraordinary, Father Joseph's virtue was also tested. God Himself permitted Joseph to be severely tempted by the devil. Added to this, he suffered for years from dryness of heart, so that he felt completely forsaken by God. But all these trials could not embitter his heart; he placed it within the wound of our Savior's side and preserved peace of mind. He had no other wish but to do the will of God. 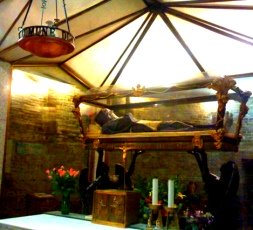 After he had stood the test of many storms, Saint Joseph of Cupertino was again rewarded with heavenly consolation. Desiring to be with Christ, he died in the convent at Osimo on September 18, 1663.

St. Joseph's superiors decided to have his body embalmed. The superiors discovered to their surprise that the tissue around the heart appeared shrunken, having drawn away from the heart. The heart itself was dry and shriveled, and contained no blood. The explanation was that many times in his life St Joseph had begged Christ to take his heart and burn it, and this now was proof of his burning love for Christ.

Numerous miracles occurred at his grave, and Pope Clement XIII canonized him in 1753. Because of his miraculous flights through the air, Saint Joseph of Cupertino is now honored as a patron of those who travel by air.