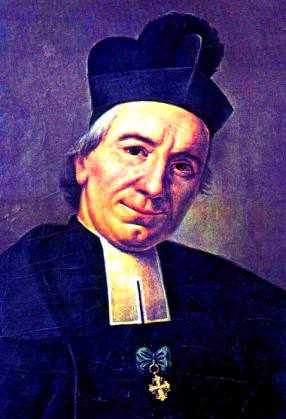 It is the lot of the city of Turin that for almost one hundred years it possessed a line of saintly Tertiary priests who have been raised to the honors of the altar. One of these is Saint Joseph Benedict Cottolengo, the man who more than any other man, in the nineteenth century at least, was instrumental in inducing men “to love, bless, and invoke that sweet and ever active providence which rules over the universe and provides for the needs of every man on his way through the toils of life to the rest of the eternal blessedness.”

Joseph Benedict was born in the little town of Piedmont called Bra, on the third of May, 1786. His parents were poor in the goods of this world but rich by virtue of noble traits of mind and character. Twelve children were born to this worthy couple. Joseph was the eldest, and was so frail in his infancy that his mother was in constant dread of losing him, but her fervent prayers and faithful care in time brought him health and strength. As soon as he was able to understand, she filled his mind with thoughts of God and of our Lady, and was careful to train him to deeds of charity to the poor.

In preparing His servant for his life work, almighty God provided Saint Joseph Benedict Cottolengo with the greatest need of the human soul – that “one in ten thousand” who St Francis de Sales recommends Phiothea to choose for his confessor. The parish priest of St Andrew the Apostle, besides being a priest who possessed more than ordinary zeal, eloquence, and piety, had a special love for the poor and the afflicted. He allowed this gentle and pure child to receive his first Holy Communion at the then unusual age of nine years.

At school, Joseph was much grieved to find himself always at the foot of his class. Some priests advised him to pray to the great St Thomas Aquinas, after which he went from the foot to the head of the class. Recognizing the event as a special blessing from God, he was desirous of reciprocating to the best of his ability, and so he frequently declared, “I will strive to become a saint.”

In spite of the various obstacles that came in his way when preparing for the holy priesthood, he nevertheless succeeded in passing the various tests of his vocation; and on June 8, 1811, he was ordained a priest in the church of the Immaculate Conception in Turin. He devoted himself with much ardor to all his priestly duties and especially to the poor and the sick; still, his heart was not satisfied, for he felt that God intended him for some special work.

As canon of the collegiate church of Corpus Christi in Turin, he was inspired, by the sight of the misery everywhere apparent and by the reading of the life of St Vincent de Paul, to take a hand in alleviating human suffering. His first steps were to provide care and shelter for the destitute sick of the parish, by renting some rooms for a hospital and interesting some young women in the work.

In 1832 there was founded at Valdocco what became known as the House of Providence. Pius IX called it the “House of Miracles,” and popularly it was styled the University of Charity on account of the diversified work of charity which the saint set afoot there, with no income or outlook but an heroic trust in the merciful providence of God. By the time of his death in 1842 the work, as it may still be seen today, was practically complete, with all its various hospitals, workshops, schools, seminaries, cloistered and non-cloistered convents, asylums for the old, the feebleminded and the insane, the crippled, epileptic, blind, deaf and dumb, and the like.

Saint Joseph of Cottolengo purchased food for his destitue patients on credit, and once forgot to pay the bill after a series of months. The creditor, naturally upset, personally presented the bill for payment. The Saint had no money, and proved it by emptying his pockets and all the drawers in the house. The creditor became so enraged that he began to strike St Joseph, when the saint once again reached into his pocket. This time he drew out several gold coins that had not been there a moment before, and paid the surprised creditor with them.

At Saint Joseph Benedict Cottolengo’s beatification in 1917 this “City of Charity” numbered some eight thousand people; and these had resolutely resisted any attempt to settle fixed revenues on the institution, so that it might remain forever what it was at the outset, a monument to divine providence.

While still a young man, Saint Joseph Benedict Cottolengo had been received into the Third Order of St Francis and had distinguished himself by his spirit of perfect poverty; he assiduously strove also to foster in himself and in others love towards the Blessed Sacrament and the sufferings of Jesus Christ. Along with supreme trust in God’s providence, Franciscan good humor adorned the saint, which no opposition, no storms, nor hardships could shake.

When the authorities of the city of Turin, giving way to protests from the people, ordered the closing of the original house, the saint smilingly complied and moved the infirmary countryward saying: “Cabbages thrive better for being transplanted.” His vast settlement with all its departments he referred to as “Noah’s Ark.”

Saint Joseph Benedict Cottolengo was only in his fifty-sixth year when he was called to his great reward. His last hours were spent in fervent prayer.

Saint Joseph Benedict Cottolengo died on the evening of April 13, 1842. Many miracles occurred at his tomb, including many cures of bodily ills and maladies of the soul. Some have even seen his visible presence. Pope Pius XI enrolled him among the saints of the Catholic Church on March 19, 1934.