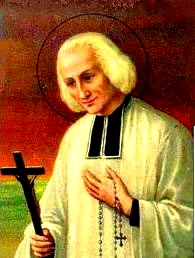 Seldom has a priestly life been so holy, so self-sacrificing, so fruitful of good for the salvation of souls as the life of the Cure' of Ars in France, Saint John Mary Vianney, who died August 4, 1859. It is a distinct honor for the Third Order of St Francis that he was one of its members.

Saint John Vianney was born in Dardilly, not far from Lyons, of simple and devout parents. Very early his pure heart experienced a burning desire to consecrate itself to God in the priestly vocation, and to win very many souls for our dear Lord. His talents were very meager; but his diligence and piety helped him to overcome all obstacles so that he was ordained in 1815.

Three years later John's bishop sent him as curate to Ars, a little village in the diocese of Lyon. His parish was at the time in a very pitiable condition. The fear of God and the practice of virtue were rare things there. Attendance at divine services and the reception of the sacraments were quite generally neglected, and the young folks were mindful of nothing but amusement, a dance taking place practically every Sunday.

It was, therefore, with a heavy heart and yet with great confidence in God that the curate entered upon his duties. Saint John Vianney realized that God's help was his first great need. Throughout the entire day he knelt before the blessed sacrament and prayed for his erring sheep.

This zeal at prayer was soon noticed, and the grace he had asked for continued its work. The people were astonished at the devotion Saint John Vianney displayed while celebrating holy Mass. His very mortified life made a deep impression upon them. His love for the poor and the sick, his mild word to everyone soon won for him all hearts.

Saint John Vianney invited them to pray, in the morning to attend Holy Mass, in the evening to recite the rosary. He also introduced a Eucharistic confraternity. He strove to eliminate the dangers to which the people were exposing themselves by their weekly dances.

When a certain person, who was earning his livelihood by means of these dances, said to him, "But a person must live," the priest replied, "True, but one must also die."

Saint John Mary Vianney conducted the divine services with all possible solemnity, and this proved at attraction for the people. By means of frequent instructions, especially in catechism, he taught his parishioners about virtue and vice, and portrayed in vivid terms the reward God has reserved for the good and the punishment that will be inflicted on the wicked.

It was well known that the saint was a miracle worker. One night, while reciting his prayers, he was seen to rise into the air with his features transfigured, an orb of light encircling his face.

This good saint was tireless in administering the sacrament of penance, always showing not only great zeal but also practicing meekness and charity in an extraordinary degree. In a few years the parish was completely transformed. The few dissenting voices were entirely ignored, and their worldly attractions were not heeded.

The fame of the blessed success and the holy life of the priest of Ars spread rapidly. Strangers came in ever increasingly numbers in order to have their consciences set aright and to obtain advice and consolation in every type of need.

From the year 1828 the concourse of people took on the semblance of organized pilgrimages; the number of strangers was estimated to be at least 20,000 annually. Numerous conversions of a most remarkable nature occurred, and many sick persons were miraculously restored to health. These cures the humble pastor ascribed to the intercession of St Philomena, who was venerated in his church.

The demands made upon the servant of God were, naturally, very great. He spent from 16 to 18 hours a day in the confessional. Besides, he conducted a catechetical instruction in the church each day, and led the rosary every evening. Along with these superhuman exertions he also practiced rigorous mortification, fasted almost constantly, and slept on a board.

In his way he spent himself in the fullest sense of the word as a good shepherd, and labored for the salvation of souls until he was 74 years old. 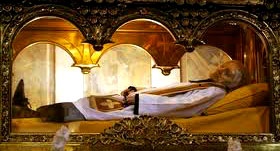 Completely worn out, Saint John Vianney collapsed at the last day of May, 1859, and died peacefully in the Lord without any agony on August 4. His body was exhumed in 1859 due to the impending beatification, and was found to be incorrupt. His heart, later removed, was placed in a relizuary and is kept in a building known as the Shrine of the Cure's Heart.

Pope Pius X beatified St John Vianney and Pope Pius XI canonized him and made him the patron of all priests who have the care of souls.