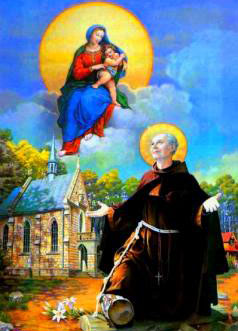 John was born at Dukla in Poland, and was raised by his pious parents in the fear of God. Filled with desire for greater perfection, he entered the Order of St Francis at an early age. He made such progress that his associated beheld in the young religious a model of perfection. His humility and heartfelt charity toward everyone caused him to be generally loved.

Frequently he was obliged to undertake the office of superior, and he administered the custody of Lwow with high praise. When St John Capistrano came to Poland in 1453, and established convents of stricter observance of the rule of St Francis, Father John of Dukla attached himself to the reformed group. Although he was now forty years old and had been a superior for a long time, he again became a model of obedience, and led the novices in the faithful observance of all the statutes of the order.

Daily he read the rule, and out of love for holy poverty he wished to have no other book. It grieved him deeply to witness even the slightest violation of the rule. He himself submitted promptly and cheerfully to all the directions of his superiors. He practiced severe mortification, kept vigils in prayer through many hours of the night, was continually active as a director of souls, and practiced great devotion to the Blessed Virgin Mary.

Saint John of Dukla had the special gift of reconciling people who were at variance with each other. He also labored with great zeal to bring the schismatic Ruthenians and Armenians back to unity with the Catholic Church.

When he was nearly seventy years old, he was afflicted by God with blindness. But John bore this affliction with great patience, and did not slacken his activities until his blessed death in the year 1484. His tomb in the Franciscan church at Lwow has been glorified by many miracles. Several of the kings of Poland interested themselves in his canonization; and at the request of the people, Pope Clement XII permitted Blessed John of Dukla to be numbered among the principal patrons of the Poles and Lithuanians. Pope John Paul II canonized John in the year 1994.

O God, who didst adorn Blessed John, Thy confessor, with the gifts of exceptional humility and patience, graciously grant that we may imitate his example and share in his reward. Through Christ Our Lord. Amen.