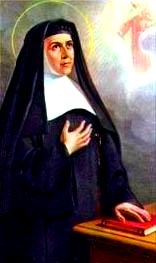 Born in Barcelona, Spain, in 1783, Joachima was the fifth of the eight children of the aristocratic Vedruna family. When she was twelve she wanted to be a cloistered Carmelite nun; but at sixteen she married a young lawyer, Theodore de Mas, who had been thinking of becoming a Franciscan. Both joined the Third Order Secular of St Francis. During the seventeen years of her married life, Joachima was a beloved wife and the devoted mother of eight children, the last of who was born in 1815.

When Napoleon invaded Spain, Theodore served in the Spanish army, after he had moved his family to Vich. When the French troops arrived there, Joachima had to flee with her children; but after the war she returned to that city, the birthplace of her husband.

Joachima and Theodore were both members of the Third Order fraternity at the Capuchin church in Vich. She was only thirty-three when Theodore died in 1816 at the age of forty-two. Though her old desire to enter a religious community was still strong in her, Saint Joachima de Vedruna had duties to perform towards her children; and so, for the first seven years of her widowhood she took care of her children. At the same time, she led an austere life, wearing the Tertiary habit as her ordinary dress, spending much time in prayers, and waiting on the sick in the hospital at Vich.

One day in 1820, as Saint Joachima de Vedruna was passing the Capuchin church, her mount refused to go farther. She went into the church and entered the confessional of Father Stephen of Olot, a noted preacher and director of souls. He told her that she was not to join an existing religious order but to found a new community which would devote itself to teaching in schools and to nursing the sick.

In 1823, two of her children married and one of them took the two remaining girls into their home. Joachima was now free to carry out her plans. Father Stephen assisted her in laying the foundations for a Franciscan sisterhood of the Third Order Regular and drafted the constitutions. The new sisterhood was formally established in 1826 in Joachima’s home with six members, but not as a Franciscan community. Bishop Paul Corcuera of Vich, a Carmelite, made it a congregation of the Carmelite Third Order Regular and called it the Carmelite Sisters of Charity. Later St Anthony Mary Claret revised their rule and constitutions. In 1850 these received the approval of the bishop and in 1880 the approbation of the Holy See.

Though a hospital was opened at Tarrega a few months after its founding in 1826, the new sisterhood had to contend with many difficulties during the first years. During the Carlist Wars, Mother Joachima was put in a prison for five days in 1837; and she, with some of her sisters, was an exile in Perpignan, France, for three years until the fall of 1843. Converts with schools and hospitals were then established all over Catalonia.

Sickness compelled Mother Joachima to resign the superiorship in 1851; and during the last four years of her life, a gradual slow paralysis caused her to die by inches. Saint Joachima de Vedruna was seventy-one when she died in 1854. In 1940, the Carmelite Sisters of Charity had 2,000 members in 150 convents, of which 135 were in Spain and 10 in Spanish America. Mother Joachima, who attained a high degree of prayer, trust in God, and selfless charity, was enrolled in the ranks of the Blessed in 1940.