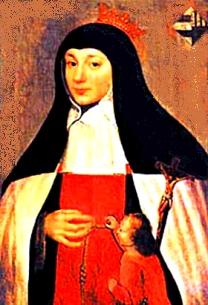 Saint Jane of Valois, the daughter of Louis XI, king of France, was born April 23, 1464. Favored with great gifts of mind and heart from her earliest years, she despised the pomp of the court and sought her joy in solitude, prayer, and meditation. This manner of life greatly displeased her proud and morose father as being unworthy of a royal princess, and he always treated her harshly.

Saint Jane, however, bore it patiently and complained of her sufferings only to God. One time the Blessed Virgin Mary appeared to the distressed girl and spoke to her:

“Be consoled, my daughter! A time will still come when you will belong to me entirely. A large group of young women consecrated to God will join you in serving me and proclaiming my praise everywhere.”

At these words a stream of heavenly consolation flooded Jane’s soul, and she resolved anew to persevere in the service of God, cost what it might.

Her divinely guided director, Blessed Gabriel Mary or Father Gilbert Nicolas, a Franciscan, encouraged her in her resolution and was her support and director on the way to perfection. From him she also received the habit of the Third Order. From then on she entertained the thought of entering a convent in order to live and die as a bride of the Crucified.

Suddenly her father announced his decision that she should marry Louis, Duke of Orleans, and she was to obey without remonstrance. In filial obedience and for love of God Jane made this difficult sacrifice in the year 1486.

Her marriage was not a happy one. Even before the ceremony took place, Duke Louis protested secretly before a notary and witnesses that he yielded to force and was marrying against his will, in order to escape the anger of the king. He always treated Saint Jane of Valois as a stranger, and if he ever permitted her to appear before him, he reproached and ill treated her.

When Duke Louis ascended to the throne of France in the year 1498 as Louis XII, his first act was to send the queen a bill of divorce. Because of the compulsion employed, the pope declared the marriage null and void. Jane accepted this great humiliation with a heart resigned to God and said:

“God has now detached me from the world and has made it possible for me to serve Him better than heretofore.”

She now repaired to Bourges, and there the revelation that had been made to her in her youth was to be realized. She united a group of young women to form a religious community which would devote itself to the special veneration of the Blessed Virgin Mary. Her regular confessor, Father Gilbert, drew up the statutes, which treat in ten chapters on imitating the ten virtues of the Blessed Virgin, to whit: the chastity, prudence, humility, faith, obedience, compassion, devotion, poverty, patience and piety of Mary.

In the year 1500 Pope Alexander VI approved this new institute, the members of which were called Sisters of the Annunciation of Mary, or Annunciades. The pope placed them under the obedience of the minister general of the Franciscans, and gave Father Gilbert the name of Gabriel Mary. Jane herself took the veil in the convent of Bourges which she had built, and on Pentecost, 1503, she pronounced her solemn vows.

Having for so long a time been prepared in the school of suffering and humiliation, she soon reached the summit of religious perfection and was ripe for heaven. God called Saint Jane of Valois to Himself on February 4, 1505. Her body was entombed in the church of the Annunciation and many miracles occurred at her tomb.

In the year 1562, the heretical Huguenots stormed the city of Bourges. Also the convent and the church of the Annunciades were plundered and destroyed. They tore Jane’s body, which was still incorrupt, out of the vault, and when they pierced it with swords, blood flowed from the wounds. The holy body was then burned. This kind of activity by these heretics puts the lie to their claim to be “reformers” of the faith, or even followers of Christ. Like the Pharaoh at the time of Moses, the miracle they had just witnessed only hardened their hearts in sin.

Pope Benedict XIV sanctioned the public veneration of Jane in the year 1742; and in 1950 she was declared a saint.