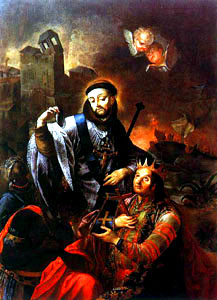 
Saint Francis Solano was born in 1549 at Montilla in the beautiful province of Andalusia, of distinguished and very devout parents. At the special request of his mother, he received the name of Francis in baptism, because she ascribed the fortunate delivery of the child to the intercession of the Seraphic Founder to whom she had recommended herself in her distress.

The boy grew to be a joy to his parents. While he was pursuing his studies with the Fathers of the Society of Jesus, his modesty, gentleness, and piety merited the esteem of his teachers as well as the friendship of his fellow students.

At the age of 20, Saint Francis Solano entered the Friars Minor. It was necessary to check his zeal rather than to stimulate it, for he knew no bounds in the practice of the strictest penitential exercises. In everything he chose the worst for his own use and spent the greater part of the night in prayer.

After he completed his studies and was ordained to the priesthood, he evinced tireless zeal for souls. The heroic sacrifices he made during an epidemic were especially admirable. He cared for the corporal and spiritual needs of the sick without any fear of infection. He became afflicted with the malady, but was miraculously restored to health. On every hand the name of Father Francis was spoken with the greatest reverence, and he was regarded as a saint. Such veneration offended his humility, and he requested his superiors to send him to the missions in Africa, but another field of mission activity was assigned to him.

Since the discovery of the New World by Columbus, the sons of St Francis had been active in preaching the Gospel in America. The fearless missionaries advanced farther and farther in their effort to bring the message of salvation to the savage Indians.

In 1589 Father Francis was sent to South America with several members of his order. The provinces of Tucuman (Argentina), Gran Chaco (Bolivia), and Paraguay fell to his lot. He encountered countless hardships; nevertheless he began his mission activities with glowing zeal. He approached the Indians so courteously and kindly that they rejoiced at his very appearance.

God Almighty assisted Saint Francis Solano in an extraordinary way. He learned the difficult language of the Indians in a very short time, and he was understood wherever he went, even in those places which he visited for the first time.

God also gave Saint Francis marvelous power over hearts. Once when he was in the city of La Rioja, a horde of thousands of armed Indians approached in order to slay all Europeans and Christianized Indians. Saint Francis went out to meet them. His words at once disarmed them. All understood what he said although they spoke different languages. They begged him for instructions, and 9,000 were baptized.

Saint Francis would lay his mantle on roaring rivers and sail across on it to the opposite shore. He placed his cord around the neck of a mad bull that had everybody in a panic, and led it away as though it were a lamb. Once when a swarm of wild locusts came up and hovered like a black cloud over the fields of the poor Indians, threatening to devastate the entire harvest, he commanded that none of them should alight but that they should depart to the mountains; at once they withdrew. Such miracles and benefits opened to him the hearts of all; they loved and revered him as their common father.

During the holy season of Christmas, Saint Francis assembled his Indians around the crib, and taught them to sing the most beautiful hymns to the Christ Child, and he himself accompanied them on the violin. He often cheered the sick with song and music. Once he was seen sitting under a tree, playing his beloved violin, and the birds flocked about him and sang along.
After Father Francis had labored 12 years among the Indians, and had won an uncounted number of heathens to Christendom, he was called to the city of Lima in Peru. There Christianity had been established for a longer time, and many Spaniards lived there, but much wantonness and immorality prevailed in this large city.

One day, led by divine inspiration, St Francis passed through the town the way the prophet Jonas once did at Ninive, and proclaimed to the inhabitants the judgements of God if they would not be converted. They were all seized with fear. They called aloud upon God for mercy, and desired the holy sacrament of Penance. The worst sinners publicly declared their determination to reform. The saint thanked God for these fruits of grace, and in devout hymns at her altar gave praise to the Mother of Mercy.

Saint Francis Solano had labored untiringly for the salvation of souls in South America for twenty years, when God called him to Himself on the feast of his special patron, St. Bonaventure, July 14, 1610. The viceroy and the most distinguished persons of Lima bore the body of the poor Friar Minor to the grave.

Almighty God glorified Saint Francis after death by many miracles, especially in favor of sick children; yes, even dead children were restored to life at his grave. Pope Benedict XIII canonized Saint Francis Solano amid great solemnity in the year 1726.