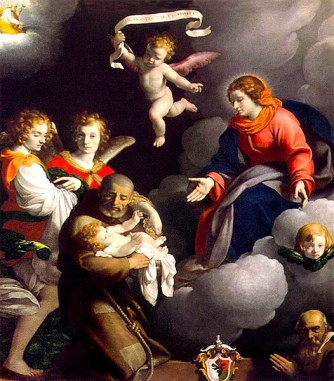 
In 1515, in the Italian village of Cantalice, in the beautiful valley of Rieti, Saint Felix of Cantalice was born of humble but pious peasants. As a boy he tended cattle, and later he became a farm laborer. Being so much amid God's free nature, his heart was attracted to God, who graciously ministers to us human beings He has daily before his eyes.

The hard work did not make Saint Felix of Cantalice coarse and worldly-minded, as sometimes happens, but he was gentle and kind towards everyone. When he came home at night all tired out, he still spent much time in his little room engaged in prayer, to which for that matter he applied himself also while at work. It grieved him that he could not attend holy Mass on weekdays. He would indeed have gladly consecrated his whole life to the service of God, but he could see no way of carrying out his desire until one day an accident showed him the way.

Saint Felix had to break to the plow a team of young oxen that were very wild. The oxen shied, and when Felix tried to stop them, they ran him down, dragging the sharp plowshare across his body. Peasants ran to the scene, certain that they would find the man dead, but Felix arose unharmed, with only his jacket rent, though he went straight to his employer and begged to be released from his service. The little he possessed he gave to the poor, and went to the nearest Capuchin convent, where he humbly begged for admission. After careful trial, his request was granted.

Now Saint Felix of Cantalice felt like one newly born, as if heaven itself had opened to him. It was the year 1543, and Felix was 28 years old. But in his novitiate he was yet to experience the burden and the struggles of this earthly life. The devil attacked him with violent temptations of all kinds. He was also seized with a lingering illness, which made it appear that he was unfit for convent life. But patience, steadfast self-control, prayer, and candor toward his superiors helped him secure admission to the vows, which he took with great delight.

Soon afterwards he was sent to the Capuchin convent at Rome, where, because of his genuine piety and friendly manner, he was appointed to the task of gathering alms, which he did for all the next 42 years until his death. With his provision sack slung over his shoulder, he went about so humbly and reserved in manner that he edified everybody. When he received an alms, he had so cordial a way of saying Deo Gratias - thanks be to God - that the people called him Brother Deo Gratias.

As soon as Saint Felix of Cantalice got back to the convent and delivered the provisions, he found his way to church. There he first said a prayer for the benefactors, then he poured out his heart in devotion especially before the Blessed Sacrament and at the altar of our Lady. He also passed many hours of the night there, and one time the Mother of God placed the Divine Child in the arms of the overjoyed Felix.

Saint Felix of Cantalice was most conscientious in observing every detail of his role and vows. He did not wait for the orders of his superiors; a mere hint from them was enough. Although always in touch with the world, he kept careful guard over his chastity in every word and look, that Pope Paul V said he was a saint in body and soul.

Poverty was his favorite virtue. Since his holy father St Francis forbade his friars to accept money in any form, Saint Felix of Cantalice could not be prevailed upon to accept it under any circumstances. How pleasing his spirit was to God was to be proved in a remarkable way. Once on leaving a house, Felix slung his sack over his shoulder, but felt it weigh so heavily that it almost crushed him. He searched the sack and found a coin which someone had secretly slipped into it. He threw it away in disgust, and cheerfully and easily took up his sack again.

Almighty God granted Saint Felix extraordinary graces. Many sick persons he restored to health with the Sign of the Cross. A dead child he gave back alive to its mother. In the most puzzling cases he was able to give helpful advice. Honored by the great and lowly, he considered himself the most wretched of men, but earned so much more merits with God.

Finally, the day arrived when St Felix of Cantalice was to gather the board of his merits. He died with a cheerful countenance while catching sight of the Mother of God, who invited him to the joys of Paradise. It was on the feast of Pentecost, May 18, 1587. Pope Urban VIII beatified him, while Pope Clement XI inscribed him in the register of the saints in 1709.