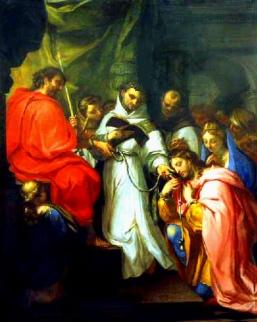 St Elzear of Sabran was born in 1285 and belonged to a very noble family. His father was the head of the house of Sabran in southern France and count of Ariano in the kingdom of Naples. His mother was a woman of great piety, who, because of her charity to the poor, was known as the good countess. Elzear was her first child.

After his baptism she took Saint Elzear of Sabran in her arms and asked God to take him out of this world if He foresaw that the child would ever stain his soul by sin. With his mother's milk he seems to have imbibed the spirit of piety, for from his babyhood he was always docile, gentle, and modest, without a trace of mawkishness in his piety. He was friendly towards everyone, and was particularly devoted to the poor.

When he was only 13 years old, Saint Elzear of Sabran undertook severe bodily mortifications in order to keep the flesh in subjection to the spirit.

Conforming to the wish of the king of Naples, who was also the Lord of Southern France, he married while still quite young, the Countess Delphina of the Glandeves family. On their wedding day both spouses vowed perpetual virginity, and persevered in living like brother and sister until death.

At the death of his father, Saint Elzear of Sabran, who was then only 23 years old, inherited his father's titles. He considered it his sacred duty to provide for the temporal, and above all, the spiritual welfare of his people. He was particularly solicitous that the laws of God and of the Church were observed in his dominions.

The poor were the special object of his solicitude. Every day 12 of them dined at the same table with him and the countess. There was remarkable calmness and self-possession in his demeanor. Personal injuries did not affect him. If anyone repeated to him anything uncomplimentary that had been said about him, he did not even ask who it was that said it, but merely replied:

"Worse things were said about Christ."

Going to Italy in his capacity as count of Ariano, Saint Elzear of Sabran found that his Italian subjects were not all disposed to accept French domination. That lasted for several years. It was suggested to him that he deal severely with the offenders, but he would not consent. In four years he had won over the people by his gentleness and charity, and all looked up to him as to a father.

Upon his return to France his subjects there prepared a great feast for him. Delphina was especially happy, and the devout couple now joined the Third Order of St Francis in order to be still more intimately united to God. Elzear redoubled his acts of piety. He prayed the divine office every day as the priests do, scourged his body severely, and nursed the sick with as much charity and reverence as if he were actually performing these services to Christ Himself.

God granted him the gift of miracles, and he cured several lepers. By his prayers he also restored health to the son of the count of Grimoard, who was the saint's godchild. On this occasion Elzear told the father that his child would one day be elevated to one of the greatest dignitaries of the Church. The child later became Pope Urban V.

Although engaged in many works of piety, Elzear never neglected his temporal duties. He was obliged to spend several years at the court of the saintly King Robert of Naples, where he gave proof of his courage and talent as army chief and minister of state.

Sent to the court of Paris on matters of state, he was seized with a serious illness. With the same serenity which he had preserved throughout life, he prepared himself for death, made a general confession of his whole life, received the last sacraments with angelic devotion, and departed from this life in his 40th year on September 27, 1323.

Because of the numerous miracles that occurred at his tomb and the urgent request of the kings of France and Naples, Pope Urban V, his godchild, with great joy canonized him in the year 1369.