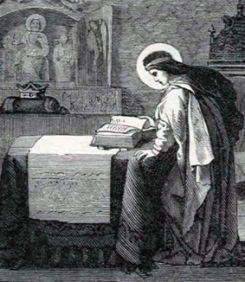 Elizabeth was the daughter of King Peter III of Aragon and of the saintly Constancia. She was born in 1271, and named after the holy landgravine of Thuringia, the sister of her grandmother. An angel of peace seemed to have come to the family with the birth of the child, because great joy over her birth reconciled her father and her grandfather, who had been living at variance with each other. Elizabeth combined great virtue with the most lovable qualities, so that her father sometimes remarked that it appeared this daughter would surpass all the women of the royal court in accomplishments.

Prayer and severe penance were Elizabeth’s delight as a young woman; but her austerity had nothing crude or harsh about it. Elizabeth was ever gentle toward others and filled with cordial charity especially towards the poor and the oppressed. Her accomplishments were lauded in all the courts of Europe, and many a prince’s son pleaded for her hand.

At a very early age her father betrothed her to Denis, King of Portugal. The first years of her married life were happy ones, her husband loved her, and God blessed the marriage with two sons. While Elizabeth fulfilled her duties as wife and mother, she contrived to find time to devote herself with holy zeal to practices of piety and charity. But ere long she was visited with a severe trial.

Her husband gave himself up to a dissolute life, becoming a scandal to the court and to the country at large, and a great grief to his devout wife. Elizabeth, however, was pained more by the fact that he was offending God than by his unfaithfulness to her. She kept her grief entirely to herself, complaining to no one but to God Himself in persevering prayer. The king never heard her make an unkind remark. Through forbearance and tender love she endeavored to bring him back to the path of duty and virtue. She increased her penitential practices and her works of charity. She visited the hospitals and public asylums, where she nursed the most disgusting patients.

One day she was washing the feet of a sick lady. When Saint Elizabeth of Portugal had washed one foot, the patient refused to extend the other because it was badly eaten by a cancerous sore. But the saintly queen urged her to comply. Then she carefully washed the ugly wound, and lovingly pressed her lips upon it. At that very moment the wound disappeared.

The heroic virtue of his wife and the grace of God finally changed the heart of the king. He begged Elizabeth’s forgiveness and returned to the path of righteousness. Thereafter she was frequently to play the role of peacemaker. Her husband quarreled seriously with his brother over certain estates. Saint Elizabeth of Portugal offered her brother-in-law an estate out of her own possessions and thus restored peace between the two brothers.

Later her own son Alphonse became ambitious and rose against his father. All his mother’s efforts to effect a change of mind in him were in vain. Alphonse, supported by powerful foes of the king, collected an army and was ready for war against his father and the royal army. Then Elizabeth, mounting her charger, rode between the lines of battle, and spoke so impressively to her son that he cast himself repentantly at the feet of his father, and in the sight of the two armies they were reconciled to each other.

Not long after, King Denis died. Saint Elizabeth of Portugal then donned the garb of a Tertiary and withdrew to a small house near the convent of the Poor Clares at Coimbra. One other occasion, however, presented itself in which she was to be the peacemaker. Her son was quarreling with the king of Castile, her son-in-law, and war threatened. In spite of her age and the heat of the season, Elizabeth started out on the journey to effect peace between the two kings. Once again she succeeded in averting war and all its evil consequences. But she became ill as a result of the exertions of the journey, which caused her to be seized with a high fever.

After a holy preparation, Saint Elizabeth of Portugal entered into eternal peace on July 4, 1336. Numerous miracles occurred at her tomb in the church of the Poor Clares at Coimbra, where the people invoked the intercession of the saintly queen with unlimited confidence.