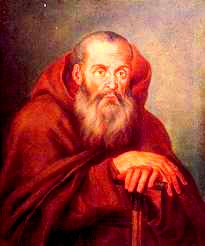 
At Viterbo, Italy, Saint Crispin of Viterbo was born of lowly tradespeople in 1668. In holy baptism he received the name of Peter. Christian piety was the worthwhile inheritance Peter received from his parents. When he was five years old his mother took him with her one day to the miraculous image of Mary of the Oak near Viterbo. She directed the attention of her little son to the Mother of God and said: "See, that is also your mother. I have made a gift of you to her. Always honor her as a good son would do." Peter did that throughout his life.

When his school days were over, the ambitious boy made the best of a chance to learn a little Latin, and his parents were told that he had the talents to study. But as they had not the means to pay for his education and did not want their son to be half-educated, they sent him to his uncle to learn the shoemaker's trade. At the wish of his parents Peter cheerfully entered the workshop and learned the trade to the complete satisfaction of his uncle.

But meanwhile, child of Mary that he was, Saint Crispin of Viterbo sought to advance more and more in piety and Christian perfection. This endeavor turned his thoughts toward the religious state. Seeing certain Capuchin novices taking an edifying part in a procession, he went to the convent and pleaded so urgently for admission that in spite of his delicate appearance he was accepted. His parents, too, gave their consent, and so he was invested on the feast of St Magdalen in 1693. He received the name of Crispin, for the holy shoemakers Crispin and Crispinian.

Even as a novice Saint Crispin of Viterbo lived so perfectly that everybody admired him. As his model, especially in humility, self-abnegation, and continual work joined with prayer, he took St Felix of Cantalice, whose life was still fresh in the memory of many who were living. After making his vows, he was sent as cook to the convent at Tolfa. There Saint Crispin of Viterbo made it his first care to erect in his kitchen a little altar to Mary, at which he offered his beloved Mother all his labors. Mary rewarded her faithful son with special proofs of her favor. Many a sick person was restored to health when he gave them some of the fruit which he had previously placed on his little altar after asking the Mother of God to bless them.

When Saint Crispin of Viterbo was cook at the convent in Albano near Rome, one of the pope's chamberlains, of whose recovery the doctors despaird, was brought to him. Crispin led him to his little Mary altar, and soon the sick person was cured for good. The pope's physician said to Crispin: "Brother, your remedies are more effective than ours." Crispin replied: "You are a skillful physician, all Rome knows that. But then, the Blessed Virgin can do more than all the physicians in the world."

A distinguished man, who had until recently led a bad life, lay ill and desired that Crispin should come and cure him. Saint Crispin of Viterbo went there, but said to him: "Sir, you want the Blessed Virgin to cure you. But, tell me, he who offends the Son, does he not also grieve the Mother? True veneration of the Blessed Virgin consists in not offending her Divine Son in any way." At the mild reproach of the holy brother, the sick man was much ashamed. He burst into penitent tears and promised to amend his life. And he faithfully carried out his promise when Crispin cured him by blessing him with a medal of the Immaculate Conception.

His superiors and brethren were edified at Crispin's perfection. In company with several of the brothers he was once with his Father Provincial, when the latter received word that in one of their convents all the brothers were down with a contagious disease and that help was needed at once. The superior mentioned his predicament. Whom shall he send there? At once Crispin volunteered. Father Provincial expressed his pleasure at the offer, but insisted that he would not send him against his will. Crispin replied: "Will, my Father? What will? When I entered religion, I left my will at home. Here I recognize only your will." When the others called his attention tot he danger of death that he would encounter, Crispin said: "That is nothing. Ihave a marvelous preventive invented by St Francis - it is the obedience in which I set out." He actually did return in excellent health after all the sick had gotten well under his care.

Wherever Crispin went, he brought pleasure with his holy cheerfulness. Among the sick he banished all discontent and complaint; it was as if an angel had come from heaven. He often held several charges at the same time in the friary, but when work piled up, he used to say: "That is good; Paradise is not for lazybones."

Even at the door of death he preserved this cheerful spirit. When he was near death as a result of weakness and other bodily infirmities, and the physician drew his attention to it, he said joyfully with the Psalmist: "I rejoiced at the things that were said to me: We shall go into the house of the Lord." (Ps. 121,1). With the sweet names of Jesus and Mary on his lips, he breathed forth his soul on May 19, 1750, in the eighty-second year of his life.

His body, which is still incorrupt, is honored in the Capuchin church at Rome. Pope Pius VII beatified him in 1806.

*from The Franciscan Book of Saints, Fr. Habig, ofm.