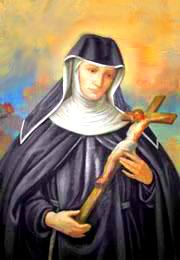 Saint Crescentia Hoess was born on October 20, 1682, in Kaufbeuren, a little town in the diocese of Augsburg. Her father, Matthias Hoess, a simple weaver, was barely able in spite of diligent work to provide the necessaries for his family of eight children. But he was a pious Christian, satisfied with his condition, and delighted to think upon the poor life and the bitter suffering of Jesus Christ. The mother bore a tender love for the sick and poor.

Crescentia received the virtues of her good parents as a precious inheritance. Even as a child she would withdraw from association with her playmates in order to pray in church or in a quiet corner of the house. If a poor person came to the house at mealtime, she often asked permission to give her portion to him.

At an early age Saint Crescentia Hoess was so thoroughly instructed in the truths of religions that her spiritual director permitted her to go to Holy Communion at the age of seven. Her answers in catechism class were sometimes filled with such depth of meaning that she said:

“My child, you must surely have a higher teacher.”

It has been recorded that her guardian angel and the Lord Himself, in the guise of a child frequently conversed with her.

As Crescentia grew older, she not only assisted her mother in all the housework, but also learned weaving from her father in spite of the fact that she was not robust. Her whole deportment, however, showed that she was not destined for this world. In town she was called “the little angel,” and she entertained no fonder hope than to be admitted among the consecrated virgins in the convent of the Tertiaries in her native town.

But the convent was poor, and the superiors declared that they could not receive her without a dowry. Then the Protestant Mayor of the town lent his aid. He had rendered the convent a great service; when the nuns came to offer their expressions of gratitude, he told them that they might now, as a favor to him, accept the daughter of the poor weaver Hoess.

“It would surely be a shame,” he added, “if such an angel were spoiled by the world.”

Now Crescentia was received into the convent, but she was made to feel that she had come without a dowry and was received only through force of necessity. She was compelled to do the lowliest work of a maid; she was regarded as a burden, frowned upon and despised. Her readiness to be obliging and friendly were set down as flattery and hypocrisy; and when visible persecutions came from the devil, she was called a witch. The nuns would gladly have gotten rid of her if they had not been obliged to consider the mayor.

In spite of all these things, Saint Crescentia Hoess remained steadfast in her vocation. When the evil enemy said to her,

“Go home, there you will not have it so bad as here,” she said in answer: “I am ready to suffer still worse things.”

Often Saint Crescentia Hoess said that she was only a poor weaver’s daughter who was received out of pity, and should consequently not be permitted to make demands. Nevertheless, after four years conditions improved. A new superior soon recognized the eminent virtue of Sister Crescentia; she was appointed portress, and later on novice mistress, in which position she won the love and respect of all the sisters to such a degree, that after the death of the superior she was unanimously elected as the successor.

As superior, Saint Crescentia Hoess evinced not only maternal affection for his sisters and holy zeal for their spiritual advancement, but also such prudence in material affairs that the circumstances of the convent became better than they had ever been. Meanwhile, she was entirely devoted to the interior life.

God almighty granted her very special enlightenment, so that her advice was constantly sought. Not only did the people come from all parts of Swabia, but princes and princesses as well as bishops and even two cardinals came or wrote to her, to ask for her advice and opinion in most weighty matters. Withal Crescentia, like a true daughter of St Francis, always remained a model of humility.

In her final sufferings her virtue was to be specially tried. From the very beginning of her convent life, she had been much afflicted with headaches and toothaches. Added to this, she was later attacked with severe pains in the side, so that she could not walk a step. As the years advanced, bodily sufferings increased. She lay so severely ill, that her hands and feet were entirely crippled, and her whole body rolled up like a ball; to this was added severe pain in the back. But remembering the sufferings of Christ, in which she wished to share, she cried out:

“O ye bodily members, praise God that He has given you the capacity to suffer.”

Yes, she drew from her sufferings peace and joy in the Holy Spirit as is indicated by her Hymn in Sufferings, which begins with the following words:

“Thou sweet Hand of God givest joy to my heart, And grantest that in pain I play the jester’s part.”

Finally, perfected in the way of sanctity, Saint Crescentia Hoess went to the joys of her Lord on Easter Sunday, April 9, 1744. Her virtues were pronounced heroic as early as 1801. She was beatified by Pope Leo XIII in the Jubilee year 1900.