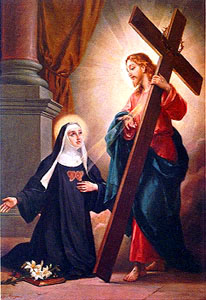 Like so many other towns in Umbria, Montefalco is a small city set on a hill. It overlooks the valley of Spoleto, and some distance to the north Assisi is visible. Here Clare Damiani was born about 1268; and as a little girl of six she was placed in the convent of Saint Illuminata, where her sister Jane was superior.

After the death of her sister in 1298, Clare, who distinguished herself by her spirit of prayer and penance and was then about thirty years old, was chosen superior. Not only did she carry out her duties as a religious and a superior in an exemplary manner, but she exerted an extraordinary influence also on the outside world. She confuted heretics, converted sinners, reconciled families which were at odds with one another, made peace between neighboring warring towns, drove out devils, foretold future events, healed the sick, and raised the dead. During the latter part of her life, she also received the gifts of ecstasy and supernatural knowledge.

It is related that our Lord, carrying His Cross, appeared to Saint Clare of Montefalco and said: “I have been searching for a long time, daughter, to find a firm and solid place on which to plant My Cross, and I have not found one more suitable than your heart. You must receive it and allow it to take root.”

Clare herself once told a sister in her convent: “If you seek the Cross of Christ, take my heart. There you will find the suffering Lord.”

When Saint Clare of Montefalco's heart was opened after her death, the Cross and other instruments of the Passion were found within, formed solidly in fibrous tissue. As an example, the crucifix was found to be about the size of a person's thumb. The corpus is white and clearly formed as if sculpted, except for the tiny wound of the lance, which is bright red. A white tissue covers the loins of the corpus. For this reason she is also called Saint Clare of the Cross.

There were also three pellets found in the gall of St Clare. About the size of hazel nuts, they were found to be symbols of the Holy Trinity for the following reason - any single one of them weighed exactly the same as the other two, and any one of them equalled the weight of two or all three of them together. These pellets can still be seen. 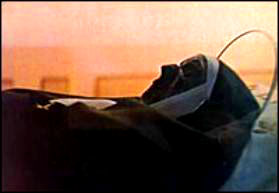 Commending her sisters to her Franciscan brother, Father Francis Damiani, Saint Clare of Montefalco died at the age of forty on August 17, 1308, and was buried in the chapel of Santa Croce Convent. Later a church was built next to it and dedicated to her. Here her body, which has been preserved incorrupt in a most unusual manner, can still be seen; in fact, it seems to be that of a living person who is asleep. The miracle of liquefaction and ebullition of her blood has also taken place. The cult which had been paid to her as Blessed from the time of her death was approved in 1624; and in 1881 Pope Leo XIII canonized her.