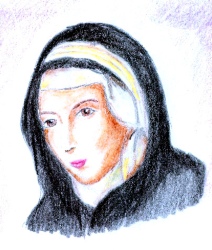 Catarinetta (little Catherine) Fieschi, child of a noble family of Genoa, was born 1447. At thirteen she wanted to enter a convent, but was refused admission because of her youth. When she was sixteen, she was given in marriage to a young nobleman, Julian Adorno by name. For this reason she is sometimes called St Catherine Fieschi-Adorno.

Saint Catherine of Genoa's husband turned out to be pleasure-loving, quick-tempered, unfaithful. This was a great trial for Catarinetta; and for a while she tried to drown her disappointment in a whirl of pleasure. However, she retained her trust in God and did not give up her religious exercises.

One day in 1473 she visited the convent where her sister was a nun, and there went to confession. That confession was a turning point in her life. In her sadness and desperation she had turned to God; and He now filled her soul with a large measure of grace, making her realize vividly her own sins and inflaming her heart with seraphic love.

Saint Catherine of Genoa began to receive holy Communion every day, and continued to do so for the rest of her life. She entered upon a most intense spiritual life. After reforming herself, she converted her husband, and then lost herself in service to the poor and the sick.

Financial ruin, brought on by the spendthrift life her husband had been living, served as a reason for disposing of their palatial home on the Via Lomellini and to take up their abode in the Pammatone, largest hospital of Genoa. Living henceforth as brother and sister, Catherine and her husband now devoted themselves completely to the works of mercy. In 1490 Catharine was made matron of the women’s division of the hospital; and she held this position for twenty-one years until her death.

After her husband’s death in 1497, a terrible plague broke out in Genoa and lasted for four years, carrying off four-fifths of the population. Catherine heroically sacrificed herself for the sick, day and night. At the same time she continued her accustomed penances and religious exercises. Frequently she was lost in ecstasy; and even when she was busily engaged in work, her mind was occupied with the things of heaven. She succeeded in a marvelous manner in combining complete “other-worldliness: with the most capable “practicality.” She also wrote an excellent treatise on Purgatory and another which is a Dialogue of the soul and the body. The Holy Office declared that these works alone are proof enough of her genuine holiness.

Purgatory, she points out, is not a joyless place, but rather one full of joy in God, which however does not abate one particule of its excruciating suffering. Bidding farewell to her goddaughter, Tomasina Vernazza, Catherine said to her:

“Tomasina! Jesus in your heart! Eternity in your mind! The will of God in all your actions! But above all, love, God’s love, entire love!” That, too, had been the program of her own life.

A mystical and mysterious illness, which was really the fire of divine love, consumed the last nine years of her life. One night in August, 1510, Saint Catherine of Genoa requested that the windows of her room be opened that she might see the starry sky. A large number of candles were lighted, and the dying seraphic lover sang the Veni Creator Spiritus.

“Let us go!” she exclaimed. “No more of earth, no more of earth!” She died two weeks later, on September fifteenth, the feast of the Exaltation of the Holy Cross.

The body of St Catherine was exhumed eighteen months after her death. Her body was found to be perfectly intact even through her burial shroud was damp and decayed. There were many miracles that occurred at this time.