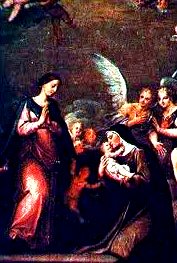 
The birth of Saint Catherine of Bologna was foretold to her devout father by the Blessed Virgin, with the announcement that the child would be a brilliant light throughout the world. On the feast of the Annunciation of Our Lady in the year 1413, Saint Catherine was born at Bologna. Her father, John of Vigri, was a relative of the marquis of Este, who resided in Ferrara. It was his wish that little Catherine, who charmed everyone with her beauty and purity, be brought to his court, to be educated there with his daughter. Here, Saint Catherine of Bologna learned the foreign languages, especially Latin, painting, and everything that belongs to the culture of a young woman of high rank. People admired in her the singular wisdom and insight with which she read the profound works of the Fathers of the Church, along with her great modesty and such purity of soul that she was looked upon more as an angel than as a human being.

The court with all of its splendor was not able to fascinate Saint Catherine of Bologna. The most distinguished suitors were compelled to withdraw without the least hope of obtaining her hand in marriage; she entertained no other desire than to be plighted forever to Jesus Christ, the spouse of her heart. When Saint Catherine of Bologna was 17 years old, she obtained the consent of her mother--her father having already died--to join a pious company of young women in Ferrara who led a religious life but had not yet adopted a definite rule. Catherine appeared among them as a mirror of all the virtues, but meanwhile she was also being subjected to very severe temptations of the evil spirit.

Four years later, a royal princess founded a convent for this society according to the rule of St. Clare, and several zealous sisters from Mantua introduced the young women to the Poor Clare rule of life. Saint Catherine of Bologna was charged with the duties of the bakery; she cheerfully undertook this laborious service, and even when the heat began to affect her eyes, she remained at her post as long as the abbess required it.

One day, just as she had placed the loaves in the oven, the bell called her to the choir for some very special religious service; she made the Sign of the Cross over the loaves and said, "I commend you to our Lord." She was not in a position to return to the bakery until five hours later, and certainly believed that everything had been burned by that time. However, when she removed the loaves from the oven, they were nicer than ever.

After a time she was entrusted with the duties of mistress of novices. Catherine tried, indeed, to be excused, explaining that she was entirely incapable of this task; but she was compelled by obedience to accept it. Her diffidence in herself drew down God's blessing on her efforts to give the novices a good training. She endeavored, above all, to impress on their young hearts that they should desire nothing but the honor of God and the fulfillment of His holy will, and so she recommended that they look upon the holy rule and obedience to their superiors as their guides. Her own experience taught her how to protect them from the snares of the devil.

"Sometimes," she said, "he inspires souls with an inordinate zeal for a certain virtue or some special pious exercise, so that they will be motivated in its practice by passion; or again, he permits them to become discouraged so that they will neglect everything because they are wearied and disgusted. It is necessary to overcome the one snare as well as the other." She also taught them to use the golden mean that leads to solid virtue.

For a long time she herself was troubled with the temptation to sleep during the spiritual exercises. Once when she was again heroically struggling against it during the holy Mass, God Almighty permitted her to hear the angelic choir singing after the elevation. From then on the temptation was overcome, and she was even able to devote hours to prayer during the night. On one Christmas eve she had a vision of the Blessed Virgin, who placed the Infant Jesus in her arms.

Catherine had spent 24 years in the convent at Ferrara and had trained many sisters in the way of sanctity when, at the request of the city of Bologna, she was sent with 15 sisters to establish a similar convent in her native town. She was appointed abbess, and governed her community with wisdom and motherly love. She was particularly solicitous for the sick sisters. In dispensing to them spiritual consolation she said, "My dear sisters, you are now the true brides of the Divine Savior, who chose pain and sufferings as His portion."

Although she was sickly from the time that she was 22, she never complained. When at times it seemed to her that her afflicted body would be justified in complaining, she would say to herself, "O bundle of corruption, which will soon turn into dust, why should you complain? It appears as if you had not yet learnt to be a true servant of Christ." 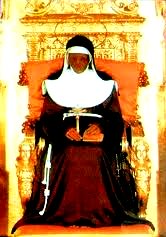 Saint Catherine was particularly tactful in preserving peace within herself and peace among the members of her community. Hence she was also loved by all of them. When she died on March 9, 1463, sounds of sobbing and weeping were heard everywhere in the convent. But even after her death her sisters were to be made joyful through her. Her body, which had been the temple of so chaste and immaculately pure a soul, diffused a sweet odor that could be noticed throughout the region.

Miraculous cures began to occur at St Catherine’s gravesite, as even the incurable were instantly healed. She had been buried without a coffin, as were all those who died in her order, but her body was exhumed eighteen days later when a heavenly perfume was noticed to come form the area. The body of St Catherine was found to be incorrupt.

The silk veil which covered the saint was bathed in sweat, which gave off the sweet odor. One of the nuns noticed a bit of skin which seemed to hang from one of Catherine's feet, and so pulled it off. Fresh blood immediately flowed, as if the saint were still alive.

St Catherine's body has remained incorrupt and retains its quality of flexibility like that of a living body. Thus it can still be seen in Bologna robed in a costly garment presented by St Charles Borromeo and seated upright on a throne, under a crystal shrine. Her skin is still normal, except that it has become darkened by the oil lamps and candles which have burned about over the centuries. Innumerable miracles reward the faithful for their devotion to her. She was canonized by Pope Clement XI in the year 1712.