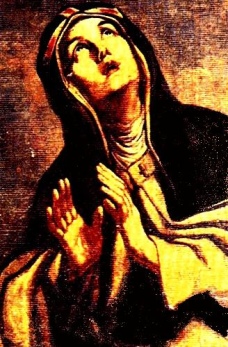 Saint Bridget of Sweden was born about the year 1302 in Sweden, and belonged to an illustrious as well as pious family. Shortly after her birth Bridget lost her saintly mother. Her father then undertook to raise her with the aid of an aunt.

As a very young girl St Bridget manifested a decided inclination for things spiritual. At the age of ten God favored her with a vision of the Crucified. The thought of the unspeakable torments which our Lord endured on Calvary affected her so deeply that she shed copious tears, and from that moment the sacred Passion was the subject of her meditation.

Saint Bridget of Sweden wished to consecrate her virginity to the Lord, but obedient to the wish of her father she married Prince Ulf, a young man of solid virtue and in every way deserving of her. Both joined the Third Order in order to strengthen themselves in the works of piety and the practice of penance. God blessed their marriage with eight children, and Bridget made it her sacred duty to raise them in the fear of God.

Among her charities there stands out especially her service to the poor and the infirm; she waited on them with great care, sometimes even washing their feet and kissing them.

During the return journey from Compostela, where they visited the grave of the Apostle St James, Ulf fell seriously ill at Arras. St Denis then appeared to Bridget at night and assured her that her husband would recover. He also foretold events which would take place in their lives. Ulf soon afterwards entered the Cistercian monastery of Alvastra, where he died in the odor of sanctity in 1344.

Saint Bridget of Sweden now divided her estate among her children and the poor, clothed herself in a coarse garment with a cord for a girdle, and began to lead a very austere life. She built a convent for nuns at Vadstena and gave them the rule of St Augustine, thus founding the Order of Our Savior. She spent two more years partly at Vadstena and partly at Alvastra, where her husband had died. Then, at God's command, she went to Rome, where she practiced the virtues in a high degree.

St Bridget labored much for the return of the papacy to Rome, and was charged by God to deliver several messages to Popes Innocent VI, Urban V, and Gregory XI.

In 1371 she made a visit to the Holy Land in compliance with a command from our Lord. There He bestowed on her extraordinary graces and imparted to her a knowledge of His sacred mysteries.

Upon her return to Italy she was stricken with a grievous illness, which afflicted her for an entire year. Having foretold the day of her death, she passed into the joys of eternity on July 23, 1373, at the age of 71 years.

St Bridget was laid to rest in the Poor Clare convent of St Lawrence in Panisperna. The following year her body was removed to the convent at Vadstena in Sweden. Many miracles were wrought at her intercession, and Pope Boniface IX canonized her.