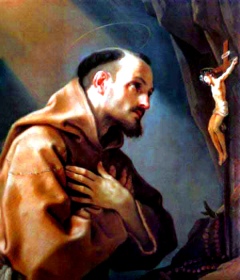 Next to God we owe a debt of gratitude to St Francis for the great Doctor of the Church and minister general of the Franciscan order, Saint Bonaventure.

Saint Bonaventure was born at Bagnorea in the Papal States in 1221, and was given the name John in baptism. As a child of four years he became seriously ill and was given up by the physicians. Then his mother hastened to St Francis, who was preaching in the vicinity just then, and begged him to come and heal her child. The saint acceded to her request; he prayed over the child, and immediately he was cured. St Francis is said then to have uttered the prophetic words: "O buona ventura - O blessed things to come!" For that reason the child was called Bonaventure.

Endowed with most remarkable gifts of nature and grace and reared in the fear of God, Saint Bonaventure entered the Order of St Francis as a young man. Completing his year of probation with honor, he continued his studies under the great Alexander of Hales. The latter did not know what he should admire most, the talent or the virtues of the young religious. He used to say it appeared that Adam had not sinned in this young man.

During his student years, Saint Bonaventure devoted many an hour to the contemplation of Christ's suffering and he was a zealous client of our Blessed Lady. It is reported that once when Bonaventure abstained from Holy Communion for several days from a sense of humility, an angel placed the consecrated Host on his tongue. After his ordination to the priesthood he devoted himself with extraordinary zeal to the salvation of souls.

Due to his extensive and profound knowledge, Saint Bonaventure was appointed professor of theology at the University of Paris at the early age of 27. Bonaventure and Thomas Aquinas, of the Order of St Dominic, at that time shed the greatest luster on that institution. Garson, the great chancellor, remarked that the University of Paris had perhaps never had a greater teacher than Bonaventure. He grasped theology with his heart as well as with his mind, and it shed its radiance on his conduct as well as his words.

Saint Thomas Aquinas once visited Saint Bonaventure while he was engaged in writing the life of St Francis. He found Saint Bonaventure raised in ecstasy above the earth. Reverently he withdrew, saying to his companion: "Let us leave a saint to write about a saint."

On another occasion St Thomas asked St Bonaventure from which books he obtained his unparalleled knowledge. Saint Bonaventure pointed to the crucifix as his library.

In 1257, when Blessed John of Parma resigned the office of minister general, Saint Bonaventure was unanimously chosen, at the recommendation of Blessed John, to fill this position. He governed the order for 18 years, and regulated everything that pertained to convent life and the external activity of the friars with such circumspection and prudence that he has quite generally been considered the second founder of the order.

Both by word and deed he defended the order against great and learned opponents. Franciscan convents had already been established in all parts of the world; Saint Bonaventure divided them now into provinces. He also composed ordinances for the faithful observance of the rule which formed the basis for all future constitutions of the order. At the same time he patiently gave audience to the simplest brother and sometimes performed some of the lowliest duties in the convent. He prescribed that the Angelus bell be rung daily in all Franciscan churches. This beautiful custom soon spread throughout the Catholic world.

In spite of all the duties of this important position, the saint still found time to preach and to write books of great learning and holy unction. He had steadfastly declined all ecclesiastical distinctions. In 1273, however, Pope Gregory X obliged him to accept the bishopric of Albano and the dignity of the Cardinalate. The pope himself consecrated him bishop and then entrusted him with the direction of the Council of Lyons.

To the great satisfaction of the pope and the fathers of the Council, the schismatic Greeks also attended the Council of Lyons. At their arrival Bonaventure delivered an address, which he opened with the text: "Arise, O Jerusalem, and stand on high: and look about towards the east, and behold thy children gathered together from the rising to the setting sun." (Bar. 5:5). Due to his efforts, the Orientals were reunited to the Church of Rome.

Worn out by the heavy strain, he fell ill after the third session. The end came very rapidly; the pope himself administered extreme unction. With his eyes directed toward the crucifix, Bonaventure died during the night between the 14th and 15th of July, 1274. Seldom if ever was there a grander funeral. The pope and all the members of the Council attended.

Pope Sixtus IV canonized Saint Bonaventure in 1482. Sixtus V gave him the title of Doctor of the Church in 1587. He is called the Seraphic Doctor because of the ardent love which marks his writings.