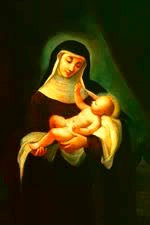 When St Clare received the veil in 1212, she left behind her at home a young sister of 14 named Agnes. In answer to Clare's prayers and inspired by God, Agnes betook herself to the same convent where Clare was then staying only 16 days after her sister's departure from home.

Their father, much enraged, hastened to the convent in company with several relatives. He used force to remove her and was in the act of dragging her along by the hair, when Agnes suddenly became fixed to the spot. The united efforts of the entire company were powerless to move her.

His anger was such that Agnes' father drew a weapon to use against his daughter, but he was seized with a violent pain in his arm and the weapon dropped from his hand. Overcome with fear, he and the rest of the band fled from the scene.

Agnes was overjoyed and returned to her sister Clare. St Francis then led the two maidens to the convent of St Damian, where he gave the holy habit also to Agnes. She now endeavored to imitate her saintly sister in everything, and devoted all her spare time to prayer and contemplation. She lived a very austere life, partaking only of bread and water, and wearing a coarse garb all her life.

St Francis soon recognized the rich treasure of virtue hidden in this privileged soul. When a new convent of Poor Clares was to be founded at Florence in 1221, St Francis sent Agnes, despite her youth, to act as superior there. Later he sent her also to Mantua and to several other cities in northern Italy to establish additional houses of the order.

Wherever she went, she edified everybody by her holy life. Many devout young women renounced the world in order to consecrate themselves to God in monastic seclusion under her direction. She had the gift of infusing the Franciscan spirit into them, both by word and example.

Saint Agnes of Assisi was favored with many extraordinary graces by God. In the great fervor of her devotion she was often raised above the earth, and once our Lord appeared to her in the form of an infant. From Holy Thursday until Holy Saturday she was once so rapt in the contemplation of the sufferings of Christ that she was under the impression she had spent an hour in this mystical state.

When Saint Clare of Assisi was about to die, she sent for Agnes to assist her in her final days. In her last moments Clare addressed her sister in these words, "My beloved sister, it is the will of God that I go, but be comforted, you will soon come and rejoin me with our Lord."

Three months later Agnes followed her sister to eternity. It was on November 16, 1253.

The body of Saint Agnes of Assisi rests in Assisi in a side chapel of the church of St Clare. Numerous miracles occurred at her tomb, and Pope Benedict XIV canonized her.