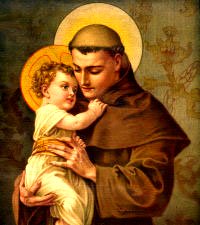 Transfer of the Body of St Anthony of Padua-Incorrupt tongue


St Anthony of Padua was known as the Hammer of Heretics and the Evangelical Doctor, and is regarded as the first theologian of the Franciscan Order. He possessed all the qualities necessary to an eloquent preacher:

“a loud and clear voice, a winning countenance, wonderful memory, and profound learning, to which were added from on high the spirit of prophecy and an extraordinary gift of miracles.”

When St Anthony died on June 13, 1231, his body was buried in the little Franciscan Church of St Mary in Padua. By 1263, the building of the present great basilica was advanced far enough so that his remains could be placed beneath the high altar.

When the coffin was opened on the occasion, it was found that the saint's body had been reduced to ashes except for a few bones, but his tongue was intact and life-like. St Bonaventure, who was present as minister general of the Friars Minor, took the tongue reverently into his hands and exclaimed,

"O blessed tongue, which has always blessed God and caused others to bless Him, now it appears evident how great were your merits before God!"

The tongue of St Anthony was placed in a special reliquary, and can still be seen today in a separate chapel on the epistle side of the basilica. In 1310 the basilica was almost finished, and the remains of St Anthony were transferred to a tomb in the middle of the nave.

The final transfer of the relics of St Anthony to their present chapel on the Gospel side of the basilica took place in 1350. It is the latter transfer that is commemorated on February 15.