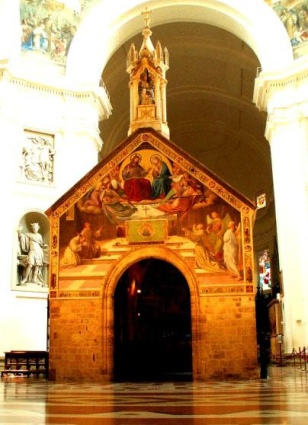 Our Lady of the Angels of Portiuncula


At the foot of the mountain on which Assisi is situated, hermits from Palestine had built an oratory in the first centuries of the Christian era. This oratory together with a small plot of land was given to St Benedict in the 6th century. The name Portiuncula, that is, Little Portion, is supposed to have been derived from the transfer of this small piece of property. The little church was called Saint Mary of the Angels, and the inhabitants of Assisi went there frequently to pray.

When St Francis of Assisi forsook the world, it was his first pious act to restore this sanctuary of the Queen of heaven, which had become somewhat dilapidated. Many extraordinary favors were granted to him in this little church of the Portiuncula. The Queen of heaven designated this place as the cradle of his order. Here, likewise, she implored for him the great indulgence by which the chapel became famous throughout Christendom.

A special impulse led St Francis on a certain night to go to the chapel. There he saw our Lord and His holy Mother surrounded by a great host of angels. Filled with astonishment and reverence, the saint prostrated himself upon the ground and adored the Divine Majesty. Then he heard the voice of our Lord urging him with ineffable tenderness to ask some special favor.

Nothing was so near to the heart of Francis as the salvation of souls, and so, after a few moments of reflection, he asked for the grace of a full pardon for all who, being contrite and having confessed their sins, would visit this little sanctuary. Mary cast herself upon her knees before her Divine Son, and repeated the petition of her faithful servant.

Thereupon the Lord said to Francis: "It is a great favor that you request, nevertheless it shall be granted to you. Go to my Vicar on earth, to whom I have given the power to bind and to loose, and ask him in My name to grant this indulgence."

Forthwith Saint Francis presented himself to Pope Honorius III, who, after having assured himself of the truth of the vision, granted his request, but with the restriction that the indulgence could be gained on one day of the year. The 2nd of August was the designated day, that being the anniversary of the little church's dedication. At the command of the pope and in the presence of 7 bishops, St Francis preached the extraordinary indulgence at the Portiuncula before a great concourse of people. From that time the Portiuncula was annually the goal of innumerable pilgrims. Subsequently the indulgence was extended to every day of the year.

A large basilica was built over the chapel, and so the little sanctuary of the Portiuncula has been preserved in its original condition. By virtue of their apostolic power the popes have extended this indulgence to all Franciscan churches, and under special conditions even to some other churches. They have also granted that the indulgence can be gained not only once, but as often as anyone, who has been to confession and to Holy Communion, visits the appointed church on Portiuncula day and prays 6 Our Fathers, Hail Marys, and Glorys for the intentions of the Holy Father. Besides, the indulgence can be applied to the holy souls in purgatory.