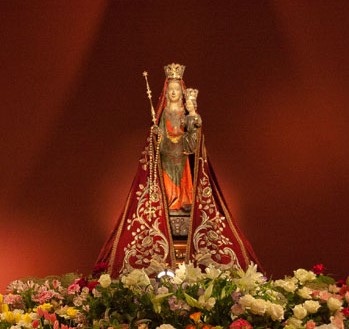 Our Lady of Arras or Hertogenbosch

The image known as the “Kind Mother” at Hertogenbosch, or “Our Sweet Lady” of Den Bosch, as she is also known in the north Brabant province of the Netherlands, was an object of derision when it was first heard of in 1380. It had been found dirty and damaged in a builder’s junk-yard, but it soon became celebrated for the wonders connected with it.

It was in 1380, when Saint John's Cathedral was being renovated, that the statue was found. An apprentice stone mason was looking for wood for his fire when he uncovered a scruffy wood statue in the rubble. The statue was in such poor condition that he didn't recognize it as the Mother of God. The mason in charge of the apprentice somehow recognized Her, even without the infant Jesus on her arm.

The statue was placed on the altar of Saint Martin in the cathedral, but the parishioners did not like it and were upset that such a dilapidated statue was exposed for veneration. It wasn't long before one of the priests attempted to remove the statue, but found that it had become so heavy he could not move it.

It was soon noted, though, that any who spoke disapprovingly of the statue became weak, fainted, or had nightmares. One woman mocked the statue, and became partially paralyzed. That night, she had a vision of Our Lord, who ordered her to repair the statue and honor it. The next day she was able to drag herself to the cathedral to begin the work. At the end of each day she was able to walk a little better.

It was an entire year later when a Brother Wout found the missing image of the infant Jesus that went with the statue. Local children were using if for a toy, but now the statue was reunited and whole.

There were still some who ridiculed the statue, but now they fainted on the spot. Many experienced strange pains, headaches, and even indigestion. On the other hand, those who prayed before the statue for a cure were healed of their illnesses and otherwise greatly favored. Due to the presence of the statue, the church became a place of pilgrimage. Emperor Maximilian, Holy Roman Emperor, and King Fernando of Castile were among the notables who visited the miraculous statue.

The statue of Our Sweet Lady is of oak and is nearly four feet tall and is of an unusual pattern: Our Lady stands upright, while her forearms are extended at right angles to her body. The Child is balanced on her left hand and in her right she holds an apple.

The dedication of the new church of Our Lady of Arras occurred in the year 1484 by Bishop Peter de Ranchicourt, who was bishop of that city. The first church which had been built at the site had been constructed by Saint Vaast, who had been the Bishop of Arras, in the year 542, using the liberal donations of the first kings of France.

The desolation caused by the Calvinists began in 1566, and many churches were plundered. The Kind Mother was hidden and saved from the destruction. Years later, when the city was seized by the Spanish, two Carmelites took the statue to Bishop Ophovius, who gave it to one of the women of the parish to safeguard.

Eventually it was feared that the statue of the Kind Lady would not be safe if it stayed were it was, and so it was decided to take the statue to Brussels for safety. The statue had to be hidden to keep it safe, and so was placed in a chest and snuck out through the town gates. It was then taken to St Geradus’s church in Belgium before being taken to Koudenberg church in Brussels.

It wasn’t until the year 1810 when the cathedral at Den Bosch was returned to the Catholics by Napoleon. Then, it took the prolonged efforts of Bishop J. Zwijsen, the bishop of Hertogenbosh, to have the beloved statue of Our Sweet Lady returned to his cathedral in 1878. It was crowned by the grateful bishop in the name of Pope Leo XIII that same year, and the feast is July 7th with proper Mass and Office in certain places.

*from The Woman in Orbit and denboschfreetours.wordpress.com