Our Lady of Zell 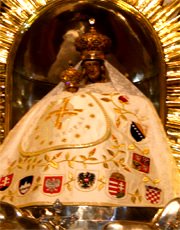 The places dedicated to Mary are the best proof that Mary gives help today to souls and bodies.

The glorious pilgrim church at Zell is nestled in the midst of the Styrian Mountains 50 miles southwest of Vienna. It is mantled in snow most of the winter and is the haven for skiers., is the Lourdes of central Europe. Since its founding, it has become the most popular Marian shrine in Austria, and there is a miraculous wooden statue of the Virgin Mary that is much venerated at the church.

According to tradition, there was once a Benedictine monk known as Magnus, who, in the year 1157, left his abbey at Lambrecht seeking a more contemplative life. As he was passing through a forest looking for a suitable place for his hermitage, he encountered a massive, black boulder that blocked his way. Magnus was stymied, as he could not continue in that direction, and so he took out a small statue of the Blessed Virgin that he kept with him. Placing the statue on a log, he knelt down to pray for guidance.

The heavenly assistance he requested was not long in coming, for the ground began to tremble, and with a loud crack, the boulder broke in two. A strange light emanated from the broken edges of the stone, revealing the miraculous cause of the break. Magnus realized at once that he had found the location of the hermitage he had been seeking, and placed his cherished statue on a stump and built a small shrine to display the miraculous statue. Pilgrims came to the place almost immediately as news of the miracle spread through the region.

Our Lady of Zell

Magnus’ statue, known as the "Magna Mater Austriae," can still be viewed. It is just over 18 inches tall, and is kept in what is called the Chapel of Miracles, which is located above the very place where Magnus had made his monastic cell. The statue depicts the Mother of God holding the Divine Child in her arm. The baby Jesus holds an apple, recalling the fall of man and his later redemption. The statue is also known as the Great Mother of Austria, the Great Lady of Hungary, and the Great Mother of the Slavic People.

This first small shrine was enlarged with a church in the year 1200, and was further expanded in 1335 after King Henry I had been granted a miraculous cure after being told in a dream to go to Our Lady of Zell. King Louis the Great of Hungary had the Mariazell Basilica built in the year 1363, which is also known as the Basilica of the Birth of the Virgin Mary, in gratitude for a military victory he won over a numerically superior army of Turks: 20,000 men against 80,000 Turks. The church he had built was of Gothic style, and in 1377, King Louis I added a chapel called the Gnadenkappelle, the Chapel of Grace. The church was damaged by fire in 1420 and again in 1474, but then expanded again in the 17th century, and is the same church that stands today.

The various peoples of the broad Danubian area have made Our Lady of Zell the goal of their pilgrimages. Jewels, crowns, and garments were brought to the Great Mother at Zell. Untold thousands of Austrians, Hungarians, Croats, Slovenes, Czechs have knelt there before Mary’s image, each feeling that his race was under the special protection of Mary.

A lamp of pure silver burns before the altar. It is the gift of the Empress Maria Theresa. She was mother of a great empire and brought her sorrow to Mariazell to the Mother of God. No castle of Our Lady was more honored and enriched by the Hapsburghs.

An average of one million people annually make a pilgrimage to the shrine of Our Lady of Zell, which in 1907 was made a Minor Bascilica by Pope Saint Pius X, who also crowned the statue that same year. There are solemn processions on the eve of the feasts of Our Lady of Mariazell, September 13th, The Feast of the Assumption, August 15th, and the Nativity of the Blessed Mother, September 8th.

The great Cardinal Mindszenty was buried at Mariazell, Our Lady of Zell, in 1975.