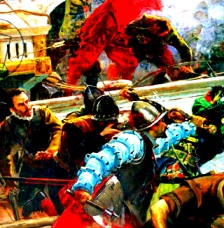 Our Lady of Victory
Lepanto

March 23: Our Lady of Victory of Lepanto

The Battle of Lepanto was a naval engagement that took place between the ships of the Catholic Holy League under Don Juan of Austria and the navy of the Ottoman Empire under Ali Pasha, supported by a large fleet of corsairs. The Ottoman Empire was far too powerful for any one Christian kingdom to stand against, and although all of Western Europe was threatened, only Spain, the Papal States, the Duchy of Savoy, the Republic of Venice, the Republic of Genoa, and the Knights of Saint John took a stand against them. Altogether they still had only 212 ships against no less than 278 ships.

For hundreds of years the Ottoman Empire had been making advances into Europe, while also making lightning raids along the coastlines to pillage and take slaves. They intended to eventually overwhelm all of Europe, and at that time Catholics stood almost alone against them as no Protestant force would do anything to oppose the invasion.

The advantage in this contest went strongly to the Turks, and so Pope Pius V implored all of Christendom to pray the Rosary to the Blessed Virgin Mary to obtain her intercession before the throne of God for their victory. Admiral Andrea Doria sailed to meet the Turks with an image of the Blessed Virgin prominently displayed in his flagship’s state room.

The Venetian forces on Cyprus had been under siege by the Turks during the time that the Catholic forces were preparing to meet them. On August 1 they surrendered after being assured that they could leave the island unopposed. The Ottoman commander broke his solemn oath, however, taking the Venetians captive and flaying their captain while he was yet alive. Once he had completed this unspeakable torture, the captain's dead body was hung from a spar on Mustafa’s flagship alongside the heads of all the Venetian commanders. This was the type of barbarism the Catholic forces sailed to oppose.

The engagement took place on the 7th of October, 1571, only 6 years after the Knights of Saint John defeated a powerful Ottoman army at Malta. Don Juan of Austria encouraged his men by telling them that “There is no paradise for cowards.” If they should lose the engagement, the Mediterranean Sea would be opened up to assist future Ottoman invasions. Victory would mean at least a brief reprieve.

The Ottoman Turks had not lost any significant naval engagements in the memory of any living man, yet they were defeated. It was widely recognized that the battle was won through the power of Mary, Our Lady of Victory. The Turks had come up like fire from the East, plundering, raping, enslaving, threatening to master the whole of Christendom, but had been defeated at Lepanto through the power of the Rosary.

The Turks had lost nearly 9 of every 10 ships, and 30,000 men went to a watery grave. The Holy League lost only 17 galleys and 7,500 men. Many historians rank Lepanto as the most decisive naval engagement since the Battle of Actium in 31 BC, proving to the Christians that the Turks could be beaten. Although the Turks soon rebuilt their fleet, many of their best soldiers and sailors were already dead at Malta and Lepanto, and they could not be easily replaced.

This feast also celebrates another Christian victory, as in 1716, Mary, Queen of Victory, was chosen to protect her children again at Petenwardein. This battle was fought on August 5, 1716, between the Austrian army of Prince Eugene and the Turks at Peterwardein in Hungary, and it was also won through the power of Mary Most Holy.

To help equip the Christian army against the Turks, Pope Clement XI emptied the Papal treasury.

The two armies met on the morning of the feast of Our Lady of the Snows; the Christian army was outnumbered ten to three; the enemy had the advantage of position; but the Christian strength lay in the right of their cause and in Mary, who watched over them. The battle was long and hot, but, behind the lines in the churches of Europe, Catholics prayed: their prayers were heard. That evening the sun set on a free Hungary. Mary’s men had won the day; Mary’s banner floated victoriously over a Christian land.

The news filled the Christian world with joy, but nowhere more than at Rome. In thanksgiving to the Mother of God for her help, glorious, solemn, pontifical ceremonies of gratitude were held in the basilica of Saint Mary. After Lepanto, Pius V instituted the feast of the Holy Rosary in Rome, and Clement XI extended it to the world.

Today other more sinister errors eat at the heart of Christian culture: Naturalism undermining man’s faith in God and himself. Communism is Mary’s enemy; it transforms the state into a god to which men must be sacrificed. Men are children of God, sons of Mary, not slaves of the state.

Against the errors of our time, we must appeal to Mary; she is our guide, our Queen of Victories and of Peace. For her and for her blessed Son we struggle, and on her powerful intercession with the Prince of Peace we place our trust.

We struggle today to preserve our birthright as sons of God. Never in her history has America been so evidently on God’s side. And Mary, our Mother, the Queen of Victory and of Peace, stands for our final victory, for our peace. Victory and peace must and will be ours, if we cling to the Mother of God. Mary will again crush the head of the Serpent, and this time, again, by means of her Rosary, if we have recourse to her through it.

*partially from The Woman in Orbit 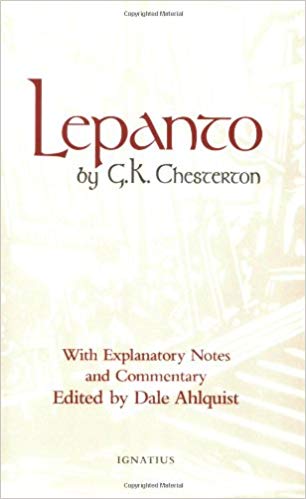 Hilaire Belloc called "Lepanto" Chesterton's greatest poem and the greatest poem of his generation. But not only have English classes neglected this masterpiece of rhyme and meter, History classes have neglected the story of the pivotal battle upon which the poem is based.

This book brings together the poem, the historical background of the famous battle, a riveting account of the battle itself, and a discussion of its historical consequences. The poem is fully annotated, and is supplemented with two interesting essays by Chesterton himself. Well-known Chesterton expert, Dale Ahlquist, has gathered together all the insightful commentaries and explanatory notes. Here is the story behind the modern conflict between Christianity and Islam, between Protestant and Catholic Europe, and the origin of the Feast of the Holy Rosary. A fascinating blend of literature, history, religion and romance!

Return to Marian Calendar March from Our Lady of Victory Lepanto

Return to Titles of Mary from Our Lady of Victory Lepanto