Our Lady of Victories 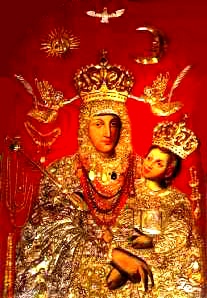 April 16: Our Lady of Victories of Saint Mark


In the year 1683 a formidable army of well over 100,000 Turks invaded Austria and laid siege to Vienna for the second time. The city was strategically located in Europe, and the Ottoman Turks had been pressing further and further into Christendom over the preceding centuries. If they could take Vienna, it would open up all of Europe to them.

Unfortunately, all of Europe was not united against the invader. The differing Protestant sects hated their Catholic neighbors more than they feared the Turk, and stood by doing nothing as the Catholics fought alone to save Europe. In fact, the Ottoman Empire had been supporting the Protestants, and encouraged them to revolt and rebel against their lawful government, which weakened Christendom and obviously played into the hands of the Turks. It went so far that they actually promised their Protestant dupes that they would be given the “Kingdom of Vienna” if they should help defeat them.

Our Lady of Victories

Suffering under an intense siege, Vienna was on the point of surrendering to the enemy. The people were filled with fear and anxiety, for had this happened, the Turks would easily have invaded the rest of Europe, and filled it with blood and strife. From all parts of the Catholic world prayers were offered to the Queen of Heaven, that she intercede and avert this disaster. Our Lady, Consoler of the Afflicted, did not fail her people.

The pious and valiant Catholic King of Poland, John Sobieski, with an army seemingly inadequate to the need, bravely marched against the enemy anyway. Even though his army was tiny in comparison to the multitudes that awaited him, there was no one else who could come to the aid of Vienna.

When John Sobieski came in sight of the Turkish camp, before beginning battle, he ordered Holy Mass to be celebrated, at which he himself served; then he begged the celebrant to bless the whole army.

Full of confidence in the help of Mary Most Holy, Our Lady of Victories, King John Sobieski manfully threw his forces into the conflict. Initiating what would be the largest cavalry charge in history, King John led his now legendary Winged Hussars into the face of the enemy like a host of avenging angels, disrupting the enemy formations and breaking their lines. 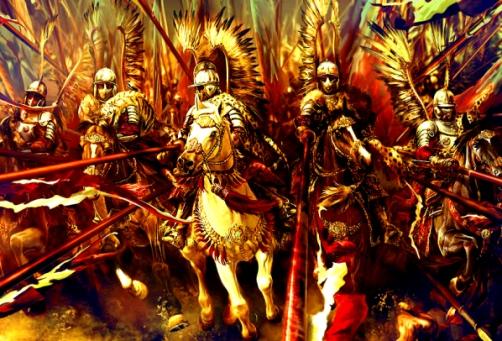 The enemy, though far more numerous, turned and fled, while the king’s army were masters of the field. The rejoicing of Christians was great at this news, and from all Christendom fervent prayers were offered to the Blessed Mother, Our Lady of Victories, in thanksgiving for her protection.

Pope Innocent XI, reigning at the time, placed all his trust in the Blessed Virgin Mary. He had vowed to institute a feast in her honor, if she would liberate the Church from this terrible danger. In fulfillment of this vow, he extended to the whole Catholic world the solemnity of the feast of the Holy Name of Mary, which had up to that time only been observed in particular churches.

The famous image of Our Lady of Victories is the one which Emperor John Zimiarnes and John Commenus carried in a triumphal car after having besieged the enemy. The image is now borne in procession at Vienna to obtain rain or fine weather, as the need may be.

Return to Marian Calendar April from Our Lady of Victories

Return to Titles of Mary from Our Lady of Victories