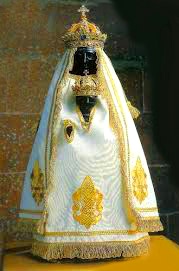 Our Lady of Vaussivieres, on the mountains of Auvergne, near Mont d’Or, where there is an image which has remained miraculously from the ruins of Vaussivieres, which was ravaged by the English about the year 1374. This image having been transferred to the Church of Besse, was found again in its former place at Vaussivieres.

Our Lady of Vaussivieres, actually spelled “Our Lady of Vassivière,” is located in the mountains of Auvergne, France. The site of this chapel among the mountains is said to be like looking down from the refreshing vision of the Blessed Virgin into a maze of tortuous valleys filled with sighing winds and the noise of the rushing torrent.

The locals maintain that their town was named by the Celts in the distant past because of the temple of water that once stood there, and although the fountain still remains nearby, it is the Queen of Heaven who is now venerated there.

There was once a small village here at Vassiviere until late in the 14th century when all was destroyed. It was during the time of the Hundred Years War in the year 1374, when John of Gaunt, the youngest son of King Edward III of England, decided to lead his army of 9,000 men from Calais to the relief of Aquitaine. Burning and pillaging as he went, he spread destruction and wreaked havoc in an effort to weaken the French, who nonetheless plagued him by setting ambushes along the way. When he came to Vassiviere he left only a fragment of the old church standing, through he left the statue of the Virgin untouched. It is not known why, other than perhaps that she inspired in him a certain respect, or through some unrecorded miracle.

John of Gaunt paid dearly for his raid, for one third of his army died in the fighting, while another third, including a larger number of horses, died from the cold weather, disease, and starvation. The remnant of the army that reached Bordeaux on 24 December 1373 continued to succumb to the bubonic plague that was then raging in the city. The following year John of Gaunt left France and sailed for home in failure.

For over two-hundred years the statue of Our Lady of Vaussivieres remained standing in her niche amid the ruin of her chapel, which was now treated as if it were some type of roadside shrine frequented only by herdsmen and travelers. That all changed in the year 1547 when a merchant from Besse and two companions happened to pass by. The merchant was a Protestant, but one of the men with him was Catholic, and he stopped to kneel and pray before the statue of the Virgin, Protector of travelers. The merchant mocked the Catholic for his faith, refusing to recognize the majesty of the Queen of Heaven. He was immediately struck blind, causing him to soon repent of his error. When his sight did not return, he promised that he would become the Blessed Mother’s most ardent devotee if she would only have mercy on him and return his sight to him. Our Lady restored his sight, and the merchant kept his promise, spreading the fame of Our Lady of Vaussivieres far and wide.

Soon there were many more miracles reported, and pilgrims began to congregate and kneel in great numbers amidst the ruins of the outdoor shrine frequented by cow herders. As there was a town in the valley with a church not too far away at Besse-en-Chandesse, it was decided that it would be a more fitting place for the pilgrims to go to venerate the statue of Our Lady. However, each time the statue was moved to Besse it would disappear, only to reappear in its niche in Vassiviere. This happened a total of three times before it was decided to build a new chapel in Vassivierre, where the statue would spend the warm summers, and then spend the rest of the year at the church in Besse-en-Chandesse. And so from July 2nd until the Sunday after the fall equinox the image of Notre-Dame de Vassiviere resides in her mountain hamlet, while the rest of the year she can be found in the church of Saint Andrew in Besse-en-Chandesse.

The people of Besse cut stones to rebuild the walls, assisted by the offerings of the pilgrims who had begun to come to the mountain to visit the statue of the virgin. The shrine they built was a small one, 24’ by 48’, made in the form of a cross. The statue of Our Lady of Vaussivieres was displayed behind a strong grate, surrounded by the candles and votive offerings brought to the shrine. By 1648 there had been 88 authentic miracles, including still-born babies being restored to life long enough to be baptized.

The original statue was destroyed during the Reign of Terror otherwise known as the French Revolution, but a copy was later made and solemnly crowned in 1881. This shrine, as well as many others, are centers of devout pilgrimages, and the miracles wrought by Our Lady in answer to the devout and earnest petitions of her clients are innumerable.

Apparently as one pilgrim remarked, “Mary is a determined lady, and gets her way with her Divine Son,” even to the place of residence, as her “returns” to Vaussivieres, above mentioned, prove.